DJ Pøptrt Takes Us to Her Virtual Club

Clubs are an integral part of the music industry. DJs create trends, curate tastes, and influence the charts. It’s been over a year since nightclubs were last open, and DJs, like many of us, have been forced to change the way they work (and we party). DJ Pøptrt is one such DJ. We talked over Zoom one year after Canada went into a nationwide lockdown and discussed the way her career has been forced to shift. Wearing a neon pink beanie and acid wash denim jacket, she sat in front of a cotton candy-coloured green screen. “I’ve been learning to ground myself and stay positive,” she said, reflecting on the past year.
‍
Hailing from Kahnawake, Mohawk territory just outside of Montreal, DJ Pøptrt has been making waves in the region’s electronic music scene for a few years. In 2018, the DJ got her own radio show on K1037, and began regularly playing at venues around the city. That is, until March 2020, when Canada went into a nationwide lockdown. After dealing with the uncertainty many of us felt during the initial months of COVID-19, she connected with friend and fellow DJ, DJ BLKFT. He introduced her to streaming, and asked if she would participate in Virtual Pow Wow Fest, an all-Indigenous virtual music festival hosted by Drum Beat, in April 2020. “Being tech savvy and having all the equipment I figured, you know, I could give it a try,” she said. The live stream filled the void of the typical live audience. “You get this sense of gratification with this interaction, which I was craving and missing so much.”
‍
Streaming also provided DJ Pøptrt the opportunity to connect with other Indigenous electronic musicians across the country, people who she may not have gotten the opportunity to connect with before. “Getting in touch with other indigenous DJs helped me grow throughout the pandemic. The virtual community we built allowed us to share experiences and constructive criticism on our current projects. It's super beneficial being in this space where everyone is doing the same thing, everyone's also inspiring each other.” Although the electronic music scene in Montreal is vibrant, she said the community she has found through working with DJ BLKFT and Drum Beat has been especially supportive. “I really do think it's just finding those people that are true and share the same values as you do.” After performing at Virtual Pow Wow Fest, DJ Pøptrt decided to set up her own DJ stream.
‍
Her weekly Twitch stream, Pøptrt’s Playhouse, has an elaborate set. “I turned my office space into a streaming space. There's a green screen on my desk, there's a green screen behind me. I love this space because it makes me feel creative.” The green screens allow her to transform her office into any space she wants: a pool party, a bedroom sleepover, or a unicorn rave. “I think the early stages of my brand and the whole aesthetic really started from when I was online, in high school and on Tumblr,” she said. “I wanted to emulate that experience and that emotion you get when you see something from your childhood, and bring that to a stage performance or anything that I do.”
‍
The DJ’s childhood was the perfect precursor to her career. “My dad was really the person who introduced me to electronic music. A lot of, you know, early nineties rave music. I have one of his CDs that is just this crazy, hardcore, rave music. And I just really was drawn to that.” Her father is also a computer technician, which inspired Pøptrt’s interest in technology and led her to deejaying. Although she describes her family as “not necessarily musical”, she gets her creativity from her mom. “She's a very gifted beader. She makes moccasins, all these crazy beaded ornaments, everything.” It was the combination of creativity and technology at home that put her on the path to electronic music and deejaying.
‍ 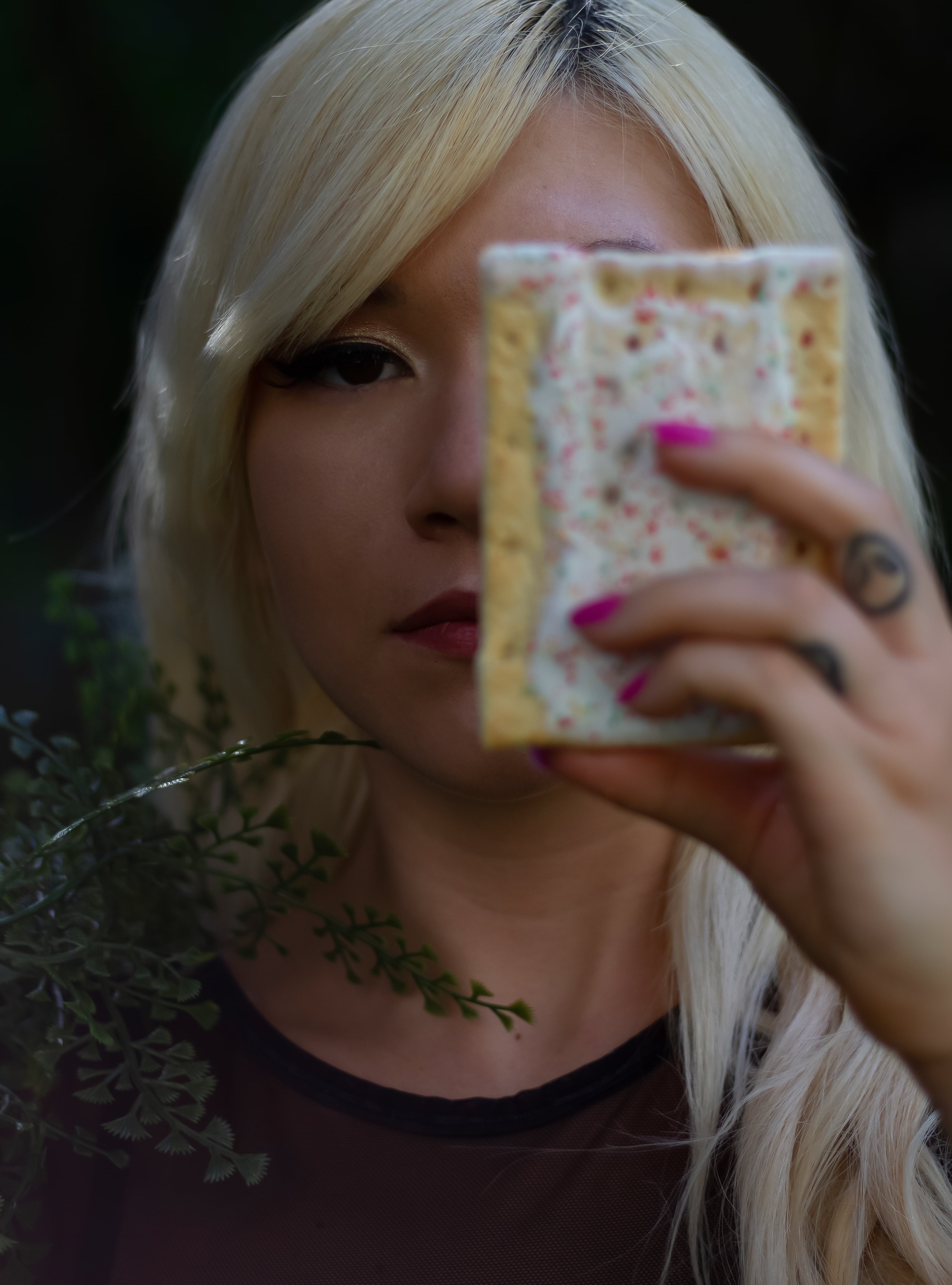 Pøptrt also works for the cultural centre of Kahnawake. At first, she began working as a digital artist, and then worked on a children’s show and as a print designer for children’s books. “I didn't think that I would have that job. Then all of a sudden I was in it and I just realized how much fun it is to create an idea for a book.” The books are also written in Kanienʼkéha. “That is also really important to me as well,” she said. “To create this literature that also acts as teaching material for our language and as well as our culture.” The self-described media nerd also deejays at K1037 on Thursday evenings. “When I was studying media and the history of media, they always started with radio. And it's absolutely just so amazing that we have a station in Kahnawake, which I grew up hearing to then have my own show. I’m really, really grateful for that opportunity,” she smiled.

On her weekly streams and radio shows, the vibe is fun, happy nostalgia. It sounds like “a retro throwback to the nineties rave scene, but with all kinds of crazy twists and turns.” She is also heavily inspired by 90s Chicago house. “A lot of these artists didn't necessarily know what they were doing, or they didn't have a classical training in music, but just did what they wanted to do. They created these sounds, mixed different beats and it just became this thing.” DJ Pøptrt found inspiration in the experimentation of 90s house: “when you want to pursue music and you don't have that educational background it can be discouraging; but if you just think, well, this genre or all these sub genres derived from this scene, you don’t let these technicalities hold you back. All these things evolved from trial and error.”

Much of her own musical career has also been trial and error. “In the beginning, I was self-taught, I was everything by myself. Now I listen to those mixes and I didn't know how to beat match,” she laughed. At one of her first events as an electronic music DJ, a fight occurred and the police showed up in the middle of her set. “It was just a crazy situation. The cops came, they shut my laptop down. I wasn't sure if they were serious. And then they actually closed my laptop.” Luckily, it didn’t dissuade her from deejaying. “I knew that experience was essentially a stepping stone to continue doing what I wanted to do. And eventually it would just turn out.” And turn out it has: DJ Pøptrt continued to play in Montreal and Kahnawake, where her career expanded as she opened for A Tribe Called Red, and played at the 2019 Ottawa Animation Festival.
‍
Although 2020 put a stopper on many of her live performance plans, she was able to play a COVID-safe, outdoor show with MUTEK Montreal in the summer. “I felt a bit nervous to go out in a public setting,” she admitted. It was unusual for her to feel so anxious before performing, but the lack of live performances in the months prior led to her feeling more nervous than usual. Once she began playing though, the nerves faded. “Being in that situation and just getting to play music and experience that with other people quickly just like brought me back. It was such a beautiful, beautiful experience.”
‍
It’s important to DJ Pøptrt that the experience is beautiful for her audience, too. She asserts that a huge part of deejaying is “connecting with people and understanding what they're craving or what the environment feels like, and amplifying that energy. Even if it's something that's not best at first, trying to transform that into something that is beautiful or fun.” She relies on music that “your body can literally connect to” to create the positive energy in her DJing space. In her latest stream she says, “Tonight is all about spreading love and peace. So I hope wherever you are, you just feel this unconditional love and peace. Sending love to everyone in the chat right now. All good vibes, all good vibes.” ■