After a five-year break, the 25-year-old singer-songwriter is back and better than ever. 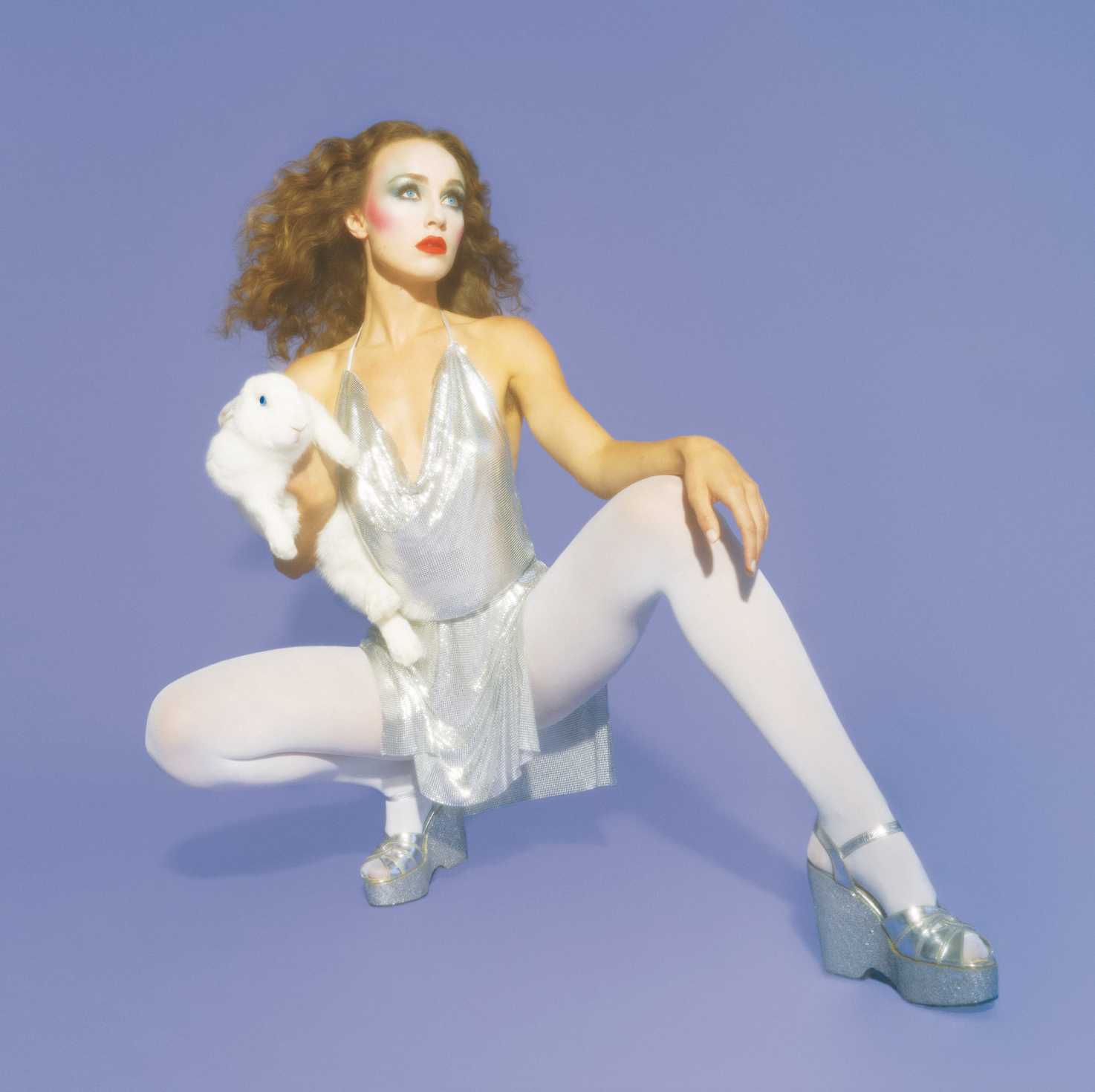 “It feels like a weight has been lifted off my shoulders,” Zella Day tells me over Zoom. It’s 11 a.m. on the West Coast, where she’s calling me from, and she’s already spent much of her morning doing press for her first body of work in five years: an EP titled Where Does the Devil Hide.

The 25-year-old Arizona native first burst onto the scene in 2015, with her sun-drenched debut album Kicker. Dealing with themes of love, loss, longing, and everything in between, the album was  well-received by critics and was featured on a slew of television shows, from The Vampire Diaries to Pretty Little Liars. In 2018, Day announced that she had been released from her deal with her label, and she subsequently signed with Concord Records and Easy Eye Sound. Now, after half a decade, the singer-songwriter is ready to reintroduce herself to the world.

“I’ve definitely gotten past some obstacles in the past four years,” she says. “And it’s a lot to get into, but I will say that I’m in a much better place now. Not that I wasn’t in a good place when I wrote Kicker, but I was a teenager when I wrote all that music, you know? And so, it’s that teenage angst – you’re kind of kicking and screaming to grow up and become an adult. I had my boxing gloves on for the past four years trying to just make my way in the world, and this EP is an arrival of self-realization and a lot of growth and strength, and understanding the industry that I’m in and how to navigate it.”

Indeed, her new EP reflects her growth as an artist, building upon the rich sonic palette she first began exploring on songs such as 2016’s “Man on the Moon” and “Hunnie Pie”. Day wanted the EP to have a classic rock feel to it – something quintessentially Californian in sound, featuring songs with lush instrumentation and hints of psychedelic rock and 70’s disco. To help her achieve this vision, she enlisted the help of The Black Keys’ Dan Auerbach, who ended up producing the project.

“I kind of threw a penny into the fountain,” she says of meeting Auerbach. “I had told my manager at the time that he’s somebody that I would really love to work with, and we put a call in, and they got back to us. So we got together and had our first writing session, and it was kind of just like, ‘we’re going to figure each other out – does this work?’. I went into Easy Eye, and we sat at a kitchen counter and smoked some weed and had some tea and had our guitar in our laps and wrote songs. Yeah, it was just a phone call that turned into this now.” Most of the EP was recorded at Auerbach’s Easy Eye Studios in Nashville, Tennessee.

“We wrote and recorded everything in a matter of like five, six days,” Day says. “So, if anything, I think the EP was an incredible exercise as a writer.” To truly emulate the project’s desired classic feel, Auerbach brought in a group of musicians who have worked with some of the most legendary names in music history, such as Elvis Presley, Aretha Franklin, and Roy Orbison.

“That kind of classic rock thread is running throughout all of their psyches,” Day explains. “And they really brought that to the room, and to my music…they work very quickly. Everybody’s kind of shooting from the hip, and it’s very instinctual and unpredictable in moments.

I think the EP really encapsulates all of that energy and definitely has a classic feel, but that’s because that’s how people used to make records. You know, when we consider pop and the way that you generally go about making a pop record or track, it takes longer, and it can be a bit more in the box and not as free feeling. I hear a lot of freedom when I listen to this EP.”

Freedom does seem to be one of the main themes running throughout the EP, a common thread connecting the five songs together. No one song sounds like the next, from the disco-inflected “My Game” to the hazy psychedelia of “Purple Haze,” yet they still manage to form a cohesive body of work.

“It’s an assertion of self,” Day states. “Proclaiming my space, and who I am in love, who I am out of love – each song is its own character in a sense, and it’s all the characters put into one space. I feel all of those things heavily – I feel the broken heart. I feel the ambitious confidence that “My Game” has. I feel the lazy stoner that “Purple Haze” has. I feel the purity that “Benny” is. It’s a little bit of everything, and it’s intentional, because I’m like ‘how do I tell people what’s going on in my life right now?’ I think doing it in just one way, it wouldn’t make sense. I’m trying to cover all bases and take a deep dive into the things that I’ve been experiencing in all shapes and forms.”

Of course, one can’t truly discuss the EP without bringing up the accompanying visuals. Primarily shot by Neil Krug, arguably one of the most prolific photographers of our time, these visuals serve to heighten the atmosphere created by the music, drawing the spectator further into its vibrant soundscape.

“The whole rollout of the EP has been such a beautiful experience, from the first conceptualization of what it’s all going to look and feel like,” Day gushes. “Those things were discussed either in my living room or in his living room over wine…it should feel like that – it should feel fun, and it doesn’t always get to, but to be able to hand over a lot of the creative responsibility to Neil with the imagery, it feels really good to do that when you trust somebody on a friend level, and he cares about the project. I think we can all really see it in the work that’s been done.”

She continues, “I’ve also found a really wonderful creative partner in Kaiman Kazazian, who has creative directed a lot of these videos with me. The three of us have really had some significant creative pow-wows…you know, it’s an investment of time and friendship and love, hard work and art.”

Krug is a close friend of Day’s, and one of the few people she has been seeing throughout the pandemic. He also lives in the same neighborhood as her, and so filming visuals for the project – something which has proved to be somewhat of an obstacle in current times for other artists – it has not been as difficult as one might expect.

“I’ve been seeing Neil and Kaiman throughout COVID, and it’s just been the three of us,” she explains. “When we’ve made content, it’s been socially distanced. We’re quarantined in our homes, and his studio is at his home. So I felt safe going over there throughout, because we’ve been knowing what the other is doing. We’ve all been really safe, and we don’t need more than three of us to make it work. I haven’t been on proper sets or anything like that with full production.”

The images themselves are beautiful – bursting with colour, they evoke another time and place entirely. The cover art for the lead single, “People Are Strangers,” was shot last year, and depicts Zella and Kaiman simply holding each other. Given today’s circumstances, where the mere sensation of human contact is something that is unattainable for many, it comes as no surprise that it’s resonated with many.

“The cover art was actually shot last year,” Day tells me. “We shot some images and had no plan necessarily to use them, but then “People Are Strangers” came around, and we were like ‘that is the image’. It’s dark in all of the right ways, and beautiful, and tragic-feeling. Especially at the time when COVID was happening, releasing an image of me holding somebody just felt like the right thing to do.”

Releasing a body of work amidst a period of social upheaval – from the pandemic, to the protests sweeping across the United States - is tricky.

Several artists, from Haim to Lady Gaga, have been reluctant to do so, not wanting to take away from the moment at hand. Day is pensive when I ask about her experiences returning back into the spotlight amidst these circumstances.

“It was so stressful,” she says. “Oh man, it makes me emotional even thinking about it. It was hard, and felt wrong in moments, actually, to promote my music. You know, I think I did so in a manner that both respected the timeline and what I've worked so hard to make - it has been, you know, the culmination of five years. It was kind of the balance of doing it, but doing it respectfully and being aware of what's happening in the world and what people are responding to, and also, that there's more important things happening in the world than me releasing music, but also figuring out a way to maintain a diligence in moving forward, because music is my livelihood.

At the beginning of this year, I think we all had big hopes and plans for life for 2020. This was my re-introduction, and it hasn't been exactly what I imagined, but that's okay, because we're all just people. It's humbling. I like when I feel small! Like this whole thing, I think, has made all of us feel small, and to really take a hard look at things that we're doing, the way that we're choosing to spend our time, and why and why we're doing that. So yeah, it's been healing in ways, but also really confusing”.

The absolute disaster that is 2020 certainly has not seemed to have extinguished Day’s hopes and plans. I ask her what she’s most looking forward to in the future, and her eyes seem to light up with excitement.

“I’m most looking forward to releasing my full-length next year,” she beams. “I spent all of July recording in Nashville. I was there for a month, and I drove there because I wasn’t going to get on a plane. That’s 36 hours – it took like a week to get out there. I visited my hometown and did some camping, and then drove all the way back afterwards. That was amazing. We’re finalizing the mixes right now, and I’m so excited to share it – it’s going to be fun!”

In the meantime, allow Zella Day to reintroduce herself with Where Does the Devil Hide, an EP that serves to both reassert her strengths as a musician, while providing us with a glimpse of where her sound is headed.

“It’s kind of like a palate cleanser,” Day says. “But with pillars of sound and attitude that are going to be running throughout the next three, five years – this cycle of music, it’s just where my head’s at.”