Thank you! Your submission has been received!
Oops! Something went wrong while submitting the form.
Home
/
Features
/
Show Reviews 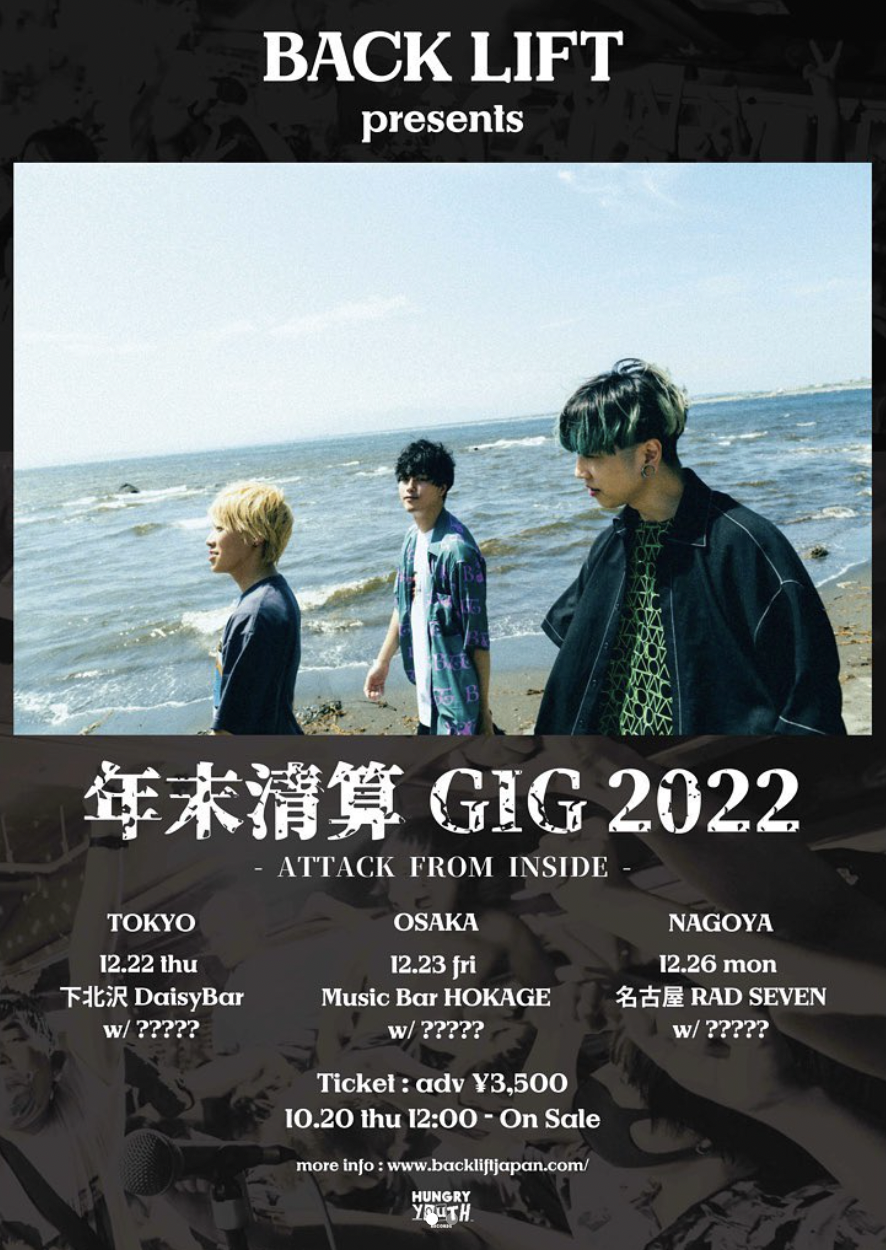 The Tokyo underground scene is something a lot of outsiders can’t really have access to mainly because of the language barrier that makes it virtually impossible for non-Japanese speakers to know what events are going on, which band is playing, or the insanely complex and bureaucratic ticketing system. This language barrier is also extremely difficult to overcome, considering how notoriously complicated Japanese can be for first-time learners (seriously? Three alphabets? Get out of here!). To me, this is an unfortunate hurdle that takes away the experience of a diverse, unique, and endlessly compelling music scene that continues to separate itself from other big cities that also have their established catalog of basement shows. Although this article is another show review instead of a guide to the Japanese underground music scene, I’ll still try to bridge the gap between an English-speaking reader base and a lonely archipelago that holds the spot for the second-largest music market in the world.

Shimokitazawa is a neighborhood that’s known for two things: an abundance of thrift stores at every block and a cluster of basement live houses that host homey bands that enjoy familiarity and replayability. A Toronto equivalent would be a seamless fusion of Kensington Market and Queen Street West—but such a comparison wouldn’t do Shimokitazawa justice, considering how the entire area itself has had its own established identity for the past two decades or so. In short, Shimokitazawa is every pretentious hipster and gig-afficianado’s wet dream. It’s got all-you-can-thrift collector’s items at a relatively affordable price, mom-and-pop theaters that regularly hosts movie nights and shows, and of course, the bulk of Tokyo’s underground rock scene. The only problem is its exclusivity; it’s rather difficult to be a part of the Shimokita community unless you’re an artist or a resident. Even as someone that used to be ingrained in the scene, momentarily stepping away from it made me go back to being a stranger in the area. Perhaps that’s what you get with a megacity like Tokyo—even if you call it your home in the papers, you’ll automatically be an outsider once you leave. Big cities always change, and unfortunately, that’s the only thing that stays the same.

The Daisy Bar is a venue in a secluded block of the Shimokita neighborhood where I saw two bands that made me finally feel a warm welcome back into the city: WATER and BACK LIFT. Both bands started outside of Tokyo, with WATER hailing from Gifu Prefecture and BACK LIFT representing Nagoya. I’m not too sure if it’s because both bands also started as outsiders, but the openness and friendliness they’ve exhibited throughout their respective sets made me feel as if I was a part of something again. It’s one thing to be good at music, but it’s another to be a memorable performer—something that both WATER and BACK LIFT have mastered. Honestly, it’s understandable that both bands share the same demographic of dolled-up, pretty groupies and rambunctiously violent Shimokita moshers. They know how to be angry, but they also know how to look good while doing so.

Although WATER was the support act for BACK LIFT at the Daisy Bar, witnessing them live for the first time made me impulsively attend a mini festival they were headlining the day after (to be fair, I did get the chance to talk to their guitarist, Hide, who was nice enough to encourage me to make it to their gig). The Gifu trio’s sound is unlike anything I’ve ever seen in Toronto, yet each song they played had a sense of familiarity in them that made me sing along as a first-time listener. Songs like “SUPER JOKER,” “TOKYO HIGHWAY,” and “engine” all have an electrifying, fast-paced tempo thanks to Kodai’s skillful drumming, but the contrast between the aggressive drum fills that litter each chorus and Seiya’s melodic, bright voice turn each song into an upbeat adventure that leaves you dancing in two-steps across the entire floor. Hide’s stability with the guitar is also important to note, as each chord he plays pretty much dictates the energy and mobility of the dance floor. The funnily titled track “BITCH SHOW” highlighted the humor that the band carried with them; there were DJ airhorns blasted each time they hit the chorus, and they dropped all formalities (something East Asian languages are quite keen on) to joke around with the crowd through a level of lighthearted self-awareness and Hide sweetly repeating the phrase “dreams come true” over and over again.

I had the chance to be more personal with them at their headlining gig on the 23rd, and I can confidently state that they’ve found themselves a new, annoying fan that won’t shut up about them. Jokes aside, getting to know WATER and talking to them from time to time during interludes made me feel like I was here in Tokyo all along. The bandmates' off-stage persona exudes that of a long-lost friend—they’ll always greet you with a wide, welcoming smile, and they’re not afraid to bite back and be snarky with you in the name of good fun. If live music is something you want to add to your dream itinerary to Japan, I’d suggest trying to catch WATER on tour while you can.

BACK LIFT doesn't need an elaborate introduction. Though they're relatively unknown abroad, they're easy to love. Sonically, they pay homage to early punk emocore acts such as Rites of Spring, One Last Wish, and Sunny Day Real Estate. Drummer Heavin carries each song with unparalleled rawness and intensity, and their current guitarist Seiya (not to be confused with WATER's bass and vocals of the same name) adds flair and flamboyance with flashy riffs. Bass and frontman Kichiku is notable for his raspy yet whiny voice that adds a semblance of gruffness to the usual nasal quality of many Japanese and emo singers. What separates them from your average North American emo act is the content of their discography. Instead of singing about heartbreak and weirdly detailed places like that one McDonald's in Pittsburgh, their songs are lyrically uplifting and optimistic. Most of their setlist came from their 2017 album,Seeding, with hard-hitting tracks such as "Hate," "sign," and "Breakthrough" centering around the inner turmoil and complex process of loving yourself. "Hate" in particular had some of BACK LIFT's most devoted fans crying as soon as they played the song, with one girl practically kneeling on the beer-stained floor of The Daisy Bar as Kichiku screams "hate yourself" in the mic.

BACK LIFT is also one of a few Japanese bands that create songs sung entirely in English. Notable hits and crowd favorites such as "Because of you," "So long," and "Screaming" are all in English—and if you can listen past the somewhat janky pronunciation, you've pretty much found yourself a heavier emo band to start listening to. Kichiku's most recent effort to incorporate the English language into BACK LIFT's discography manifests in their 2022 EP Dream Wagon, which blends English and Japanese verses to enhance an already touching song about never giving up on your dreams.

Although BACK LIFT's set had too many encores to count, witnessing the band go back to their older tracks (Kichiku coins this era their "first generation with a guitarist you guys don't even know or care about") instantly made the crowd go wild. As the band jokingly wished the crowd would go home so they could drink at a bar next door, one of the fans asked if he could borrow Kichiku's mic stand and carried it over the fence to the floor. Kichiku, who already proved to everyone that he is a showman in his own right, jumped over the fence that separated the stage from the crowd, cheekily promising everyone that he'd sing one, final song in return for a safe trip home. He also added another snarky comment about quitting the band if the mosh pit broke his bass guitar, a request that luckily didn't fall on deaf ears. After reciting a heartfelt speech about finding your own place in this world, the band began to tease the intro to "LIVING ROOM," a 2011 release from their debut album, FOR YOU,FOR US. It's been a while since I've been to a concert where everyone knew all the words to the entire setlist, so it was a moving sight to see fans crowd around Kichiku, sharing the mic with him as they all lived through a brief yet everlasting moment of togetherness. It got to a point where the crowd's singing drowned out the rest of the band's instruments—something I would now consider a benchmark for a successful show.

I'm trying not to end this article on a cheesy note, but it's rare to find musical acts that can truly make you feel comfortably at home. WATER and BACK LIFT gave me the warmest welcome back with their respective forms of encouragement—the former pushed me to let loose and have fun, and the latter told me that I always have a place with them. Hopefully, this little glimpse into the Tokyo music scene will pique your interest and travel plans for next year. If Tokyo and Shimokita end up as your next destination, all I can say is to prepare cash at hand. Finding these basement live houses can easily be done through quick Google searches, but they usually refuse credit and debit. Ticket providers are pretty much inaccessible to non-Japanese speakers, so just make sure you have enough to pay at doors and get yourself a few in-house drinks. The show and booze combination is a universal fact of life; lord knows I could handle attending a concert where I don't understand anything sober.