Thank you! Your submission has been received!
Oops! Something went wrong while submitting the form.
Home
/
Features
/
Local News

The Love and the Pain of the Local Show Scene 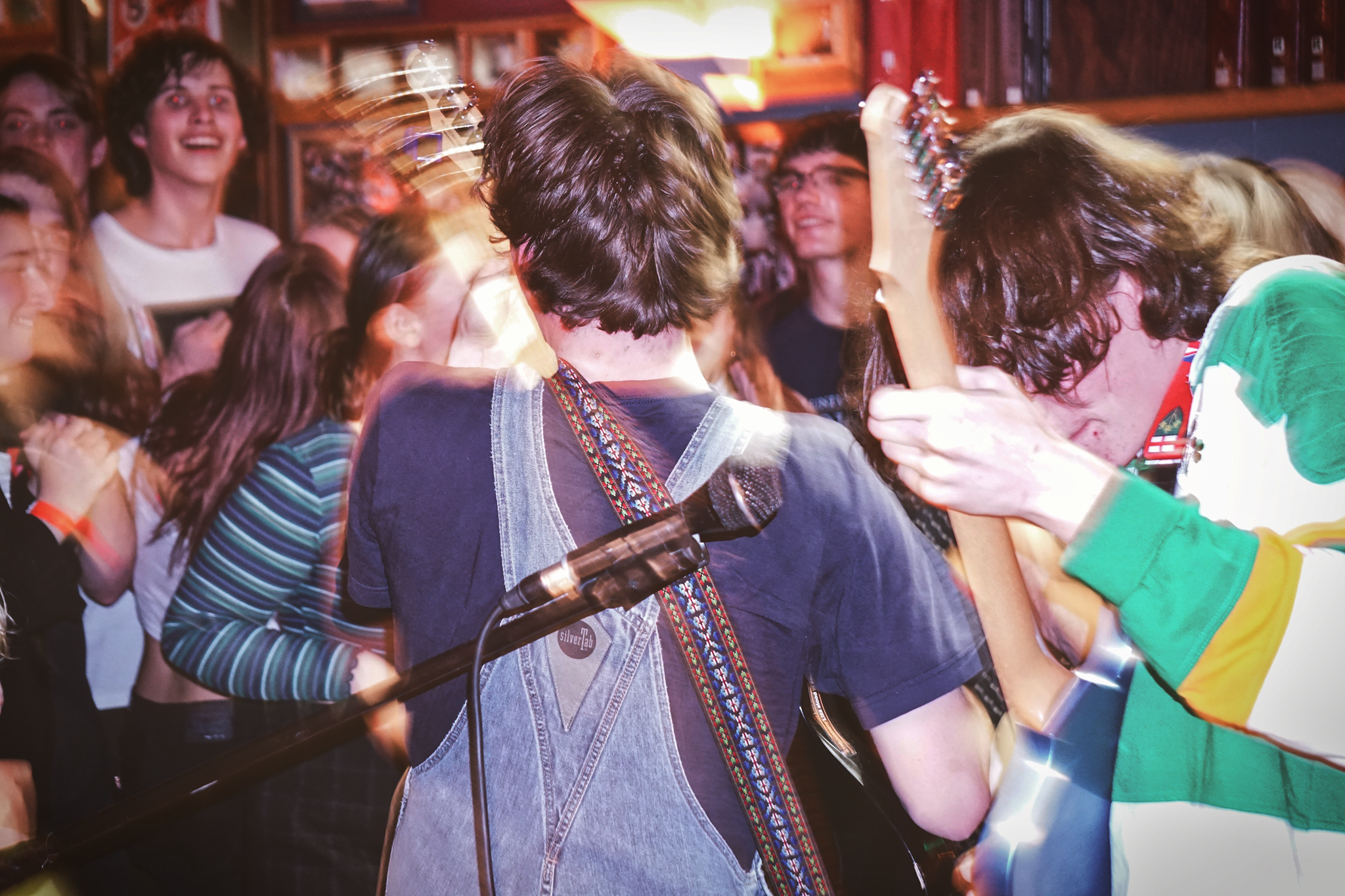 Garagefest was a show conceived in April 2016, in a Facebook group chat filled with kids from the East Bay who happened to all like music.

I was just a dorky tenth grader and a mediocre bass player of a church band, but somehow circumstance had made me the head honcho of the operation. The bands? A bunch of locals who already played a lot of shows together, and consequently amalgamated into a network of musicians. The venue? The garage of a band member’s parents’ house. And the name? Clearly a product of pure creative genius.

As passionate and determined as we were to make it happen, we were just as young and clueless about event management. And it showed. The beginning was rough, to say the least: we were late to set up, the first band was messy, and people began to leave. I was a sweaty, anxious wreck. But then Garagefest developed its own rhythm, and the kids were dancing on the street in the middle of Californian suburbia without a care in the world. Forget school, forget family. What mattered was here, now, and the magic we were making in the little space that we had carved out for ourselves.

I kept at it for the next couple of years, helping out with Summerfest in 2016, and the following year doing my first solo project at Inklings with Sad Vegan, Half-Mad, and The Cause. Then, when I came to UofT, I did a few open mic events with Jam for Justice. As of August of this year, I’ve been the primary force behind the University of Toronto Scene Initiative’s notorious Battle of the Band.

Research and reach out to different venues, confirm the venue, then do the same thing with performers. Coordinate equipment, make flyers, spam social media channels with said flyers. Try to, and fail to, suppress the exponentially increasing stress that resurfaces now and again on the days leading up to the show. Have a stress dream. Or two. Set up equipment, except everyone who was going to bring equipment comes late/the equipment that was going to be provided is broken/there’s no staff there with access to the sound booth, so don’t actually start setting up the equipment until 30 minutes before the show’s supposed to start. Realize we’re missing pieces, so stall a bit more. Try to squeeze in the soundcheck like we had originally planned, but run out of time. Say “fuck it” and start the show –– the bands can do a quick one before they play, anyways. Run around, correct the sound balance. Make sure everyone knows when they’re going up. Dance a bit. Is everyone having a good time? Oh my God, where is that feedback coming from? ‍

Despite all the years undoubtedly shaved off of my lifespan from the stress of putting on shows, despite all the repetition that’s involved, the frustration, the roadblocks, et cetera, I still don’t feel tired. After every show, when the spell is momentarily broken, I take a second to breathe. Then I look towards what comes next, because it’s time to get back in the game, baby. The feelings the shows give me, the rush, are addictive.

How can I capture a feeling? The anxiety and excitement that colour the days leading up to the day is straightforward enough. I feel like the entire success of the show rests on my shoulders. It's the fruit of my labour, my baby, a part of myself. As such, how the show goes is reflective of myself and my abilities. I hold myself accountable for all of the good and all of the bad. And then the excitement –– I mean, concerts are fucking dope. There is a certain je ne sais quois that makes concerts, particularly the intimate events at smaller venues like I am accustomed to organizing, so energizing, so life-giving. The bands are necromancers who fill the air with electricity. With a single strum, the audience comes alive in a frenzy of sweat and bodies and breath. As the audience lives, so do I.

So as you could imagine, it’s incredibly rewarding to watch something that you’ve put together unfold into this celebration of life. Which brings me to this: if there’s one thing I’ve noticed that sets the University of Toronto music scene apart from the East Bay, it’s that there isn’t one. There’s no shortage of musicians, for sure, but there’s also no significant, centralized, or cohesive community at UofT. This can be attributed to a wide variety of reasons, of course. Just take the lack of available resources, for example, like practice spaces and equipment. Hopefully, the construction of the Student Commons will change this.

But there’s another challenge to building this community that is much more difficult to overcome. It’s something much more insidious about UofT that sets it apart from the experiences I’ve had in California: the people don’t want to come together. The student body at the University of Toronto takes itself too seriously. No, the student body at the University of Toronto has resigned itself to the demands of modernity. The less sleep you get, the more hours you spend cooped up in Robarts, the more courses you take, the more extracurriculars you do, the higher positions you hold, the more your university experience is validated. Respected, even. Achieve, achieve, achieve. Then you binge drink on Fridays to release the tension that’s built up over the week. The UofT path to success is one-tracked. You get your grades, you build your resume, and you get out. The idea of doing something purely for the happiness it brings is not in the vocabulary of a UofT student. Life isn’t something to be enjoyed for its own sake.

Cue a statement about the academic culture that the institution itself encourages for the sake of maintaining its high ranking. Regardless, my point is that music is important. Good music events are important. Going to these events is important! They not only offer spaces for community building and raw creative expression, both of which are good for the soul, but they also offer spaces for release, for escaping the burdens of living in a world that demands burnout. What they provide is an opportunity for a renewed sense of enjoyment and interest in life for all of its absurdities and gifts. Music is one of the most profound and beautiful things that this stupid human existence has given us. So fuck it –– let’s dance.

Tags:
2020
UofT
University of Toronto
Feature
local music
live
toronto
battle of the bands
Other posts You might like
Playlists
Playlists