Sleater-Kinney do more than just entertain at Toronto concert 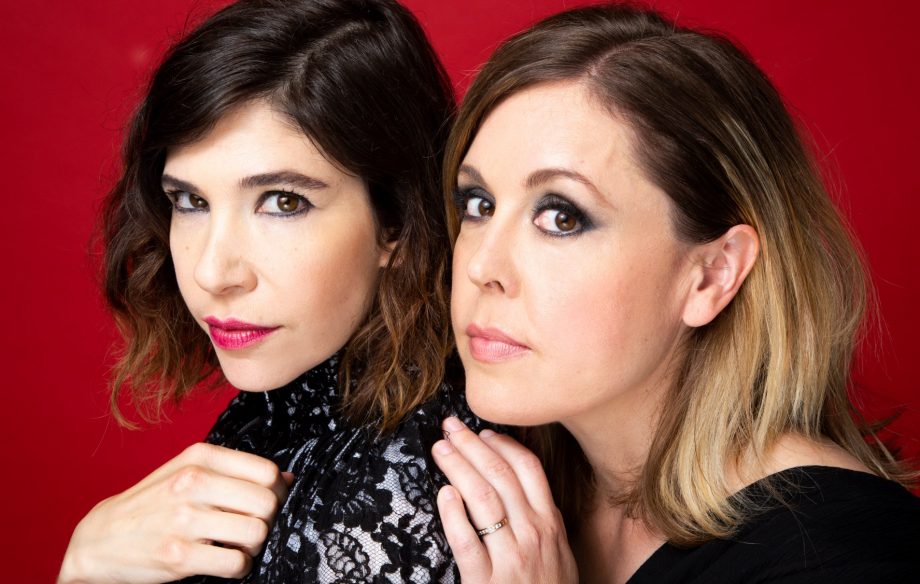 The other aspect of the band’s riot grrrl origins that shone through came in the form of their desire to connect with the audience over a cause, one that lies at the intersection of the personal and political.

Down one member but up three new ones, Sleater-Kinney returned to Toronto on a tour in support of their latest album The Center Won’t Hold. In spite of the recent lineup change, the band was in top form, ripping through every song with energy powerful enough to make up for cold weather and a notably difficult-to-reach venue (Rebel at the Lower Don Lands). Against an on-stage backdrop of nightmarish visuals, the crowd was treated to more than twenty songs—including every song from the new album and a generous dose of classics from their catalogue.

Some might think of Sleater-Kinney as having “gone pop” on the recent album, working with St. Vincent and creating bouncy numbers like “Love”. In truth, their punk roots are present on it from the title track, as it starts with an eerie chant that explodes into a riff fit for a grunge atmosphere. It is a song that would be right at home on their 2005 album The Woods. The live setting only served to amplify such reminders of the past, as nearly every song played was faster and more vocally raw than its recorded version. If you’ve been skeptical about the new album, the show might change your mind– it certainly redeemed a few tracks that I had previously been apathetic about, like the plodding, dread-inspiring “Ruins.”

Carrie Brownstein and Corin Tucker also have a healthy sense of humour that helped turn the show’s two hiccups into memorable highlights: jumping into a suddenly dissonant chorus of “One More Hour,” the two quickly realized they had both been playing the song in the wrong key up to that point (“But in the same wrong key!” Carrie laughed. “That’s what I love about you: we made the same mistake!”). And on the set’s closer, an otherwise rousing version of “Dig Me Out” contained a small slip in the guitar riff during the bridge that prompted the band to play the entire song once more through before ending the show. It was strangely inspiring to see a band this impressive own their mistakes the way they did– if I might draw on the lyrics of a song I’m somewhat disappointed they didn’t play, they never felt overly “professional.”

But with a discography as incredible as Sleater-Kinney’s, how can anyone really expect them to include every deep cut that every fan had hoped to hear? All things considered, the songs from past albums were great choices. This set featured seemingly every great song from The Woods (except the titanic 11-minute “Let’s Call It Love,” which could have proved difficult with a new drummer), as well as a balanced array from other past albums. A personal favourite was their ode to love and death “Get Up,” but I was almost as excited to hear One Beat’s “Light Rail Coyote,” which felt utterly transformed live: more urgent in its faster tempo, the quiet sections felt desperately muted while the head-banging riffs of the loud sections roared with an ecstatic intensity.

In a way, the band’s dynamics mirrored a particular compliment they paid the audience at one point: “You guys are so good at going from polite and quiet to rowdy and energetic!” Carrie told us. “It’s something we don’t get so much from our American crowds: critical listening.”

“We’re not here ‘cause we want to entertain,” she later snarled on a blazing rendition of “Entertain.” Entertaining as the show was, she wasn’t just being facetious– it was clearly intended to be something more than a spectacle. The other aspect of the band’s riot grrrl origins that shone through came in the form of their desire to connect with the audience over a cause, one that lies at the intersection of the personal and political. Corin took a moment to thank the audience for being there after alluding to the difficulties of dealing with mental health during the intensive process of a tour. Later in the set, she invited members from the audience to help sing parts of the band’s most recent single, “Animal.” Showing up and participating seemed to be the big themes of the night, as Carrie referred to the current turbulent political times and emphasized the importance of being there not only for world struggles, but for the people who need you. To paraphrase the chorus of one of the new album’s simultaneously desolate and hopeful songs, we need each other more than we ever have, because the future’s here and we can’t go back.