Show Review: The Vaccines at the Mod Club

Shortly before The Vaccines began their set, the crowd stood in silence as the lights in the Mod Club turned off. 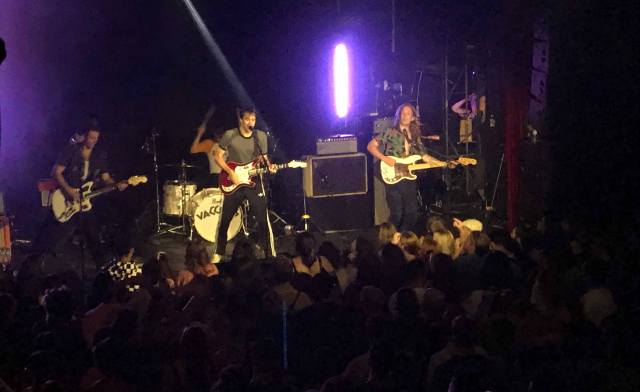 Shortly before The Vaccines began their set, the crowd stood in silence as the lights in the Mod Club turned off. The silence was broken by a clip of ABBA’s “Waterloo” playing on the speakers; a song that has seen a resurgence in popularity by the release of Mamma Mia! Here We Go Again. The song, with lyrics such as “promise to love you for ever more” or “couldn’t escape if I wanted to”, could also describe the band’s relationship with Toronto.

In the past seven years, The Vaccines have had seven shows in Toronto. Throughout the concert, the band demonstrated a genuine appreciation for the city, going as far as to debut an unreleased song. Their love for Toronto isn’t unfounded— I personally believe that Toronto has one of the best indie rock scenes in the world. The band opened with “Nightclub”, a number from their newest album Combat Sports, which started off their set with considerable energy.

While some bands seem over-rehearsed to their detriment, resulting in stiffness and inability to connect with their audience, The Vaccines’ demeanor felt casual. There was a moment where they stopped “20/20” due to being off-key, which isn’t a dig at them. Sometimes, it happens. What doesn’t happen often is how naturally lead singer Justin Hayward-Young admitted to this mistake, engaged in some banter with the audience, and restarted the song without worries. In this sense, it felt like the audience were guests at a jam session with them rather than just at a show. Given the intimacy of the Mod Club, it felt appropriate.

There was palpable excitement among the crowd as the band played old favourites like “Post Break-Up Sex” and “Nørgaard”. As a long-time fan who could not see The Vaccines during this era, I felt grateful to be able to finally hear these old favourites live. The band then took advantage of this excitement among the crowd to debut an unreleased song titled “Let’s Jump Off the Top”.

“Let’s Jump Off the Top” is classic Vaccines but not in an un-fresh way. It’s short, upbeat, and provides a similar vibe as “Wreckin’ Bar (Ra Ra Ra)” without being too similar. Knowing that I was one of the first people to ever hear this song was special, and it speaks to the band’s genuine appreciation of Toronto.

Prior to seeing The Vaccines, I knew they were a band I enjoyed listening to. I didn’t realize the extent to which I had a personal connection I had with their songs until I heard them live for the first time. I once wrote a television pilot in high school and incorporated “I Always Knew” into my favourite scene. “No Hope” and “I Can’t Quit” were songs that conjure fond memories of the first time I had sex. What makes seeing The Vaccines significant to me personally is that I feel like I could chart major events in my life through the lens of their songs.

The Vaccines closed their show with “All in White” which is not one of their most energetic songs, but it is an emotional note to end on. It was one of those moments where it felt like the band and the audience were performing the song to each other mutually. It made for a satisfying ending as The Vaccines and their fans belted “I’ve known you all my life” at each other.