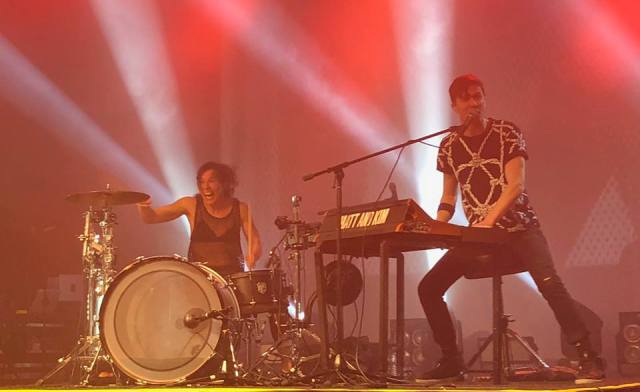 There’s no better way to celebrate Canadian Music Week (CMW) than with an old-fashioned party. The 2018 music festival kicked off on May 7 at the Phoenix Concert Theatre. Dance-pop duo Matt and Kim brought a combination of balloons, confetti, and sweat to help Toronto with the festivities.

Openers Monowhales, formerly known as Ginger Ale & the Monowhales, set a frenzied tone throughout the venue. Their set consisted of quick and catchy songs alternating between influences such as July Talk and Queens of the Stone Age, with a dash of pop. Each member drew the attention of the crowd and affirmed the neat dynamic within the band. Lead singer Sally Shaar came prepared with beautifully raw vocals and an undeniable sense of charisma, supported strongly by the keyboardist and Macbook-wielding Holly Jamieson. At the end of their set, Shaar dove into the audience, promising to party hard with the crowd.

If you’ve kept up with Matt and Kim this past couple of years, it’s an astounding achievement to see how much energy their live performances still carry. It was only in April of last year that they cut their tour short after Kim painfully injured her knee at a festival and had to undergo surgery. This experience was recounted in their quirky vlogs that tracked the journey to recovery and to their latest album. So when Kim spent the majority of their set in Toronto climbing on her drum-set and jumping around, it’s hard not to fall in love with her.

Releasing their album Almost Everyday on May 4, Matt and Kim closed off their successful tour just as CMW started. They found creative ways to engage the already adoring audience, like throwing balloons in the middle of the set and asking the crowd to blow them up. As if that wasn’t enough to add to the colourful atmosphere, they encouraged the pit to split into two sides and then run into each other—a friendly wall of death.

The setlist consisted of a mix of tunes from their extensive discography, all the way from their debut album in 2006 to their most recent release. They divided up the show with a sprinkle of covers, such as Van Halen’s “Jump” and DMX’s “Party Up”. These moments acted as intermissions during the show, in which Matt and Kim freely danced around with the audience as if it was a private party. Some of Matt and Kim’s own songs were played for longer, such as “Daylight”, with each repetition of lyrics swelling with energy.

Matt and Kim spent most of their set looking at each other, and then at the crowd, with the widest grins that ever graced a stage. They established a personal connection between themselves and individual members of the audience, creating an openness within the confines of the venue. By the end of the night, it was pretty obvious that a new and special relationship had developed: Matt and Kim and Toronto.