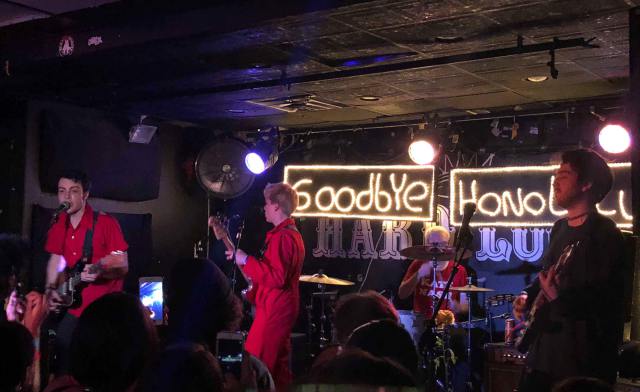 Don’t wear heavy layers to a Goodbye Honolulu concert. That was the main lesson that I learned at their Rock N Roll Fantasy show on April 26.

The evening commenced with openers Miss World and Mother Tongues playing to a laid-back audience at Hard Luck Bar. It felt like both acts were experimenting on stage more than playing structured songs as if this was the sound-check and not the performance. The openers were raw and chaotic, lending a juvenile and underground feel to the show.

As we waited in between acts, Goodbye Honolulu band members were seen floating around the venue, cheerfully greeting friends and rushing to change their clothes. Nothing was stopping anyone from going up and chatting with them. There was no barrier between the act and the audience; it was refreshing to see rock musicians who didn’t feel the need to hide behind a detached façade.

Their intimate show took place against a crafty backdrop of lights that spelt out their name. Before their set, the atmosphere had been very relaxed; but suddenly, as their opening song began, a whirlpool of hard-core fans opened up in the middle of the pit. Flannel-wearing teenagers along with older, Black Keys-clad fans moshed to every single word that Goodbye Honolulu shouted from the stage. There were two entertaining performances to witness that night: the one on stage and the one on the floor. Both of them commanded the same vigorous, pulsating energy.

The first time I saw Goodbye Honolulu— when they opened for punk rock band SWMRS in December— I was surprised by how much energy they had. They seemed like the definition of “cool”. That same energy was present at the Hard Luck Bar, but on a more attainable and connective level. Their members asserted their position as a cool indie rock outfit from Toronto, but also as people that you could lovingly call “dorks”. They went on mini-rants after each song, messed around with each other, and openly talked to the audience. At one point in the night, they roasted the venue as the Bar made people under 19 pay to use the coat check and charged everyone for water. In response to this injustice, they went backstage and grabbed their water bottles and handed them out to thirsty moshers. They screamed out “fuck Nestle” and turned their concert into a statement.

Suddenly, Goodbye Honolulu became that band on the block. The band that inspires you to go thrifting and don some Hawaiian shirts, just so you can match with their on-stage aesthetic. The band whose name is plastered as the opener for so many acts in Toronto, recently for Kate Nash and soon for The Beaches and Hinds, because the whole world apparently already knows how fun their performances are. The one you chat with after the show and later on pretend that you’re friends with, in order to raise your indie cred around the city. If ever there was a movie about the Toronto music scene, Goodbye Honolulu would be its soundtrack.