Some artists know how to write great songs for live performance, and the Foo Fighters are some of the best. 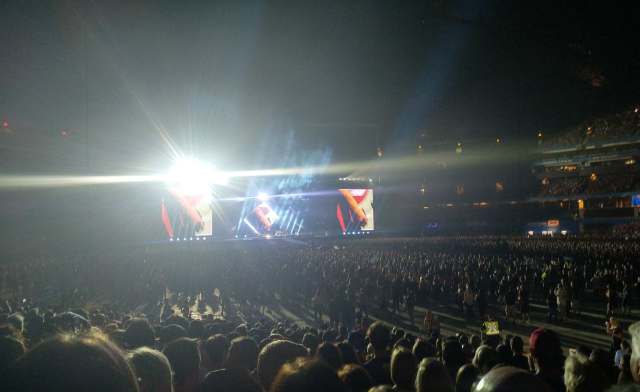 Some artists know how to write great songs for live performance, and as far as concerts go, the Foo Fighters are one of the great performances you can hope to see in your lifetime. It has been a long-standing goal of mine to see them live (especially given how rockstars are dropping dead like flies). For two years I’ve missed the opportunity, but this past month I finally saw them at what I am begrudgingly forced to refer to as the “Scotiabank Arena”.

Full disclosure: I missed the opening acts because I was playing pool at the Roxy, so if you’re here for my opinion on The Struts…I’m sure they’re fine.

The Foo Fighters’ show began with volcanic renditions of ‘All My Life’, ‘Learn to Fly’ and ‘The Pretender’. Leave it to them to start out with a bang. The band continued with two songs off their latest record (and namesake of the tour) Concrete & Gold. The vocal quartet on ‘The Sky is a Neighbourhood’ was pleasant though unremarkable, and was upstaged by Taylor Hawkins’ drumming. Hawkins was incredible. He played a ten-minute drum solo following the extended outro of ‘Rope’, where he beat the hell out of his drum kit. Though I expected nothing less, it was still remarkable to witness.

It was during the middle of the set when the Foo Fighters demonstrated their aptitude for live performance. They played some softer tunes – ‘My Hero’, and ‘These Days’ – and mixed in some covers while introducing the rest of the band. Guitarist Chris Shifflet sang a rendition of ‘Under my Wheels’ by Alice Cooper; Nate Mendel, on bass, sampled Queen’s ‘Another One Bites the Dust’; the keyboardist, Rami Jaffee, played a rendition of John Lennon’s ‘Imagine’, followed by ‘Jump’ by Van Halen. In all honesty, the keyboard songs were forgettable. The choice to play ‘Imagine’ smack in the middle of a hard-rock concert, immediately followed by MTV hair metal, was perhaps ill-advised. Finally, there was the obligatory song where Dave Grohl takes the sticks to remind everyone he was the drummer for Nirvana, and led band in a high energy cover of ‘Under Pressure’, again by Queen. Overall, a great way to keep the audience engaged and showcase the band’s talent.

The Foo Fighters then played ‘Dirty Water’, and Grohl’s daughter performed backup vocals in a quartet. The moment was endearing, and, fortunately, she left the stage before that ain’t-Dave-a-great-dad-sweetness could wear off. A melodic rendition of ‘Best of You’ finished the first set, with Grohl playing in the centre of the arena. He used this stage time to chat with the audience – the kind of engagement the band is renowned for. Cue some playful backstage videography before the encore, and the Foo Fighters shortly returned to stage to finish the night with ‘Big Me’, ‘Times Like These’ and, of course, ‘Everlong’.

In the end, the show was three hours of loud, uncompromising, rock’n’roll. It is a must see for fans seeking a good show worth their cash. The band knows rock’n’roll will never die if it is kick-ass live. So, if you’re on the edge about the genre or the band, see them perform and you’ll understand what you’ve been missing.