Thank you! Your submission has been received!
Oops! Something went wrong while submitting the form.
Home
/
Culture
/
Features

When you’re initially known as a comedic musician, it can be hard to switch over to putting out serious music. 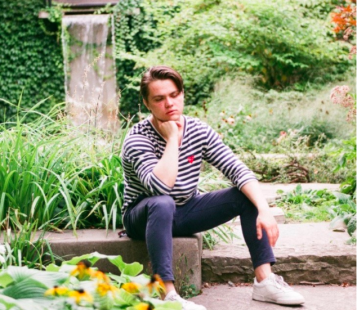 In the past few years, Rich Brian and Joji are probably the best-known examples of artists who have successfully navigated that transition. Toronto’s  No Achilles – a.k.a. Anton Mikhaylov, also understands this challenge. He started out as a self-described “meme rapper” in high school, but since transitioning away from that style, he’s re-emerged with a new stage name and an entirely different sound. His vocals are melodic, heavily layered and drowned in reverb, while his guitar-based instrumental tracks are minimalistic and nearly ambient at times. And it works.

Demo caught up with No Achilles on-campus recently to discuss his origins in music, his name change, and the making of his latest tracks, “Help Me,” and “Stuck.”

How’d you get started in music?

I started making music in grade 9. My early songs were mostly subpar dubstep remixes, and then I transitioned over to making French House because I got into sampling. I did that for a couple of years and then in grade 12, I tried rapping over a Madlib beat as a joke. People in my high school liked it, so I figured I’d continue to make meme rap as Yung Tuna. And I did, up until a year ago.

I was going to ask about that – what made you decide to start recording as No Achilles?

I started to feel like the rapping was creatively limiting, especially since I was mostly doing it as satire and I felt like I couldn’t break out of that box. I initially picked “No Achilles” because it sounds cool. But then I thought more about why I chose that, and I realized I really liked the contrast between “No Achilles” – which can read as having no weakness –  and the emotional vulnerability I let through in a lot of my songs.

Walk me through the creation of your two latest tracks, “Help Me” and “Stuck.”

“Help Me” was inspired by the whistle at the end of Lana Del Rey’s “White Mustang”, which was essentially what the song was built around. I just threw down some chords, figured out a melody with the whistle, and quickly wrote out the hook for the track. I left it sitting for a while because I was feeling a bit uninspired. Fast forward a couple months, and I’d just gone through a break-up, so the words came easily. I wrote a bunch of sappy post break-up lyrics and slapped them over the track.

“Stuck” just happened by chance. During the winter break, my friend Arif and I were chilling every day because everyone else was away and all we had to do was jam. He’s on guitar, and I’m on keys. We figured out the hook and melody for the song in one of those jam sessions, and the rest came really quickly from there.

What projects do you have lined up for this year?

Learning more music theory. Making more songs. I don’t have any albums or EP’s planned yet, but you never know what’ll happen by the end of the year. Relearning saxophone, cause I want to incorporate that into my new music. And hopefully at least one live performance that’s not at a house party.