Music For These Times: A Conversation With Rising Pop Star Elio

Charli XCX’s new favourite artist tells us about her latest music, and what she’s been up to during quarantine 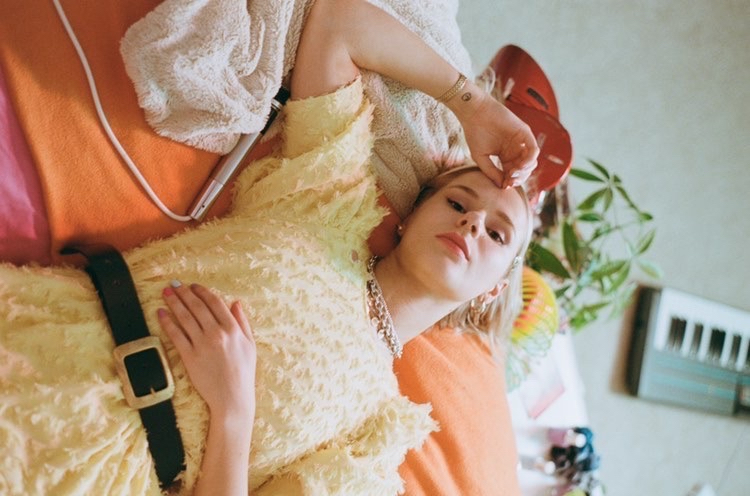 On March 19 –– well into the COVID-19 pandemic –– rising pop star, Elio, released her debut single, “My Friends Online”. Over swirling synths and gentle percussion, she sings about feeling disconnected from the real world, and the constant need to feel connected to others via social media. Although she did not quite know it whilst writing, the lyrics are oddly prophetic of the current times, and echo feelings of isolation and social burnout which many of us experience — now more than ever.

“I wrote it in November, so none of this was really a thing then,” she tells me over Zoom. “It was mainly just because I was in LA, and all of my friends and my family and my boyfriend are here [in Toronto]. I found myself staring at my phone, and anytime that I wasn’t working, I was glued to it,” she recalls. “It’s mainly about having to live out your relationships online, and with that, having friends on the internet that you’ve never met before but that you feel so connected to. And a week before we were set to release and everybody went into lockdown, I was like, ‘These lyrics are hitting way too close right now’ - you literally couldn’t have predicted it.” Nevertheless, the song has resonated with listeners across the globe, and is now appearing atop some of the most popular playlists on Apple Music and Spotify. Elio’s singular vision and distinctive brand of bedroom pop make it apparent that the emerging singer is well-poised to take over the world of pop music.

She didn’t always plan on being a full-time musician, however. “I had a band in high school, and I’d been writing and stuff there, so I’ve always been doing it, but it’s always been a side thing,” she says. “I actually went to U of T. I dropped out of my third year and just went for it. I went to LA and the UK and met a bunch of people, started doing co-writes and stuff like that while I was there, and it’s just grown from that point. I was doing more music than I was essay writing, and so I was like, ‘I should probably –– I mean, you know, I’m 21, I can –– risk it’. So I did.”

Elio initially pursued a joint program between Sheridan and U of T before focusing solely on art history. “I went to UTM technically,” she says. “I actually kind of miss it — I liked school.”

While the rest of us U of T students were hunkering down for midterms, Elio was in LA, meeting with music industry players such as Katie ‘Twiggy’ Rowley, who also manages prolific pop star Charli XCX.

“I met her and we got coffee together in LA, and she was just so amazing. She’s exactly what I wanted in a manager,” she says of Rowley. “So it’s Charli, Twiggy, and then my other manager, Sam. Their whole dynamic is really cool because they’re all best friends, and they grew up together. Over a few months, I kept talking to them and kept meeting up with them. And then Charli was in New York in September promoting her album, and I happened to be there writing. We just met up, and it’s kind of just been like this ever since!”

Charli appears to have taken on a co-managerial type role, promoting Elio’s music on her Beats 1 Radio show ‘The Candy Shop’ and her Spotify playlist, ‘The Motherfucking Future.’ She also recently asked Elio to remix the lead single off her new album how i’m feeling now, titled “Forever”. Whereas the original song contains the industrial, futuristic sounds XCX is known for, Elio took a softer approach to the music, and added her own vocals to the mix.

“It was really fun, ‘cause I hadn’t heard the song before,” she says of the experience. “She sent me the stems, so I gave it a couple of listens and then just didn’t listen to it until I was done the remix. I feel like it’s definitely an interesting combo of me and her. I also added some acoustics in there, because I was like ‘Charli’s voice over some acoustics would just be so good.’”

Elio is one of the few artists today who operates more or less completely independently: she writes and produces all of her own music, drawing from a broad palette to achieve her desired sound.

“I’m all over the board in terms of influences,” she says of the sonic inspiration behind “My Friends Online”. “It was the 1975, but also Taylor Swift is massive for me as well —I love her songwriting. And definitely Kacey Musgraves. I don’t think I’m influenced by a certain genre, it’s more just like people’s song-writing: I’m attracted to clever song-writing, and that tends to be the artists that I really love.”

Perhaps the vast array of influences could explain the diversity within her music itself: whereas “My Friends Online” is a laid-back, mellow track, her second single, “Body Language”, is made for the dancefloor. Both songs deal with the ways in which technology can influence and affect relationships, however.

“I feel like it’s definitely the same feeling,” Elio says of “Body Language”. “It’s just more zoomed in on a particular relationship that’s affected by that.” Her boyfriend is also a musician, and given that he often goes on tour, and that she splits her time between Toronto and LA, the two are unable to see each other that often. “We’ve been dating for almost four years, and we’ve always had to work on knowing how to communicate over the phone,” she explains. “But sometimes, it’s like you say something that would totally land if you’re in person, like a joke or whatever. But because I texted it, it can be misconstrued, and it becomes a whole misunderstanding.”

While her first two singles focus on her relationships, the singer says that the EP is “definitely more so about me, and less about me and other people for sure”. She also explores the full range of her sonic influences. “I feel like I have very different sides to how I write,” she divulges. “These first couple ones have been very pop, a bit dance-y and electronic. I feel like the next one’s very indie-pop, like alternative. And then there’s also a lot of R&B on the EP, which nobody’s heard yet. So that’s going to be really fun I think, to put that out and have that world out there as well.”

While it’s hard to be productive during a pandemic, Elio has been keeping herself occupied. It has been undoubtedly busy for her as she prepares to release her EP, finishes up songs, and designs their accompanying artwork and visuals. She’s also shared a playlist of all the music that she’s been listening to during this time, which is now available on streaming platforms.

“I feel like I’ve gone through phases,” she says when I ask her about what she’s been listening to in quarantine. “I started off listening to a playlist that I call ‘Pop Prototypes’, and it’s all like Top 40, absolute bangers — such saturated pop. I couldn’t stop listening to it. I was like, ‘It’s the second week of quarantine, and I’m not leaving my house. Why am I having a rave right now?’”. Now, she’s moved on to more chill, mellow songs, songs which occupy “the weird in-between” space between happy and sad, dominated by artists such as Lorde, George Harrison, Conan Gray, and Kacey Musgraves.

Traditionally, an artist would embark upon a tour to promote newly released work, but like many, Elio finds herself constrained by the current situation at hand. “I’m desperate to go out and play shows and play these songs,” she says. “I feel like that’s going to be my favorite part, hands down. As soon as possible, I want to be doing some sort of tour, even a home show in Toronto or something.”

She laughs when I let her know that at least some of us from the demo team will show up to support a fellow member of the U of T family. “You know, you gotta! You gotta support your school,” she says.