Life is Yours: Foals at the Queen Elizabeth Theatre, 12/10 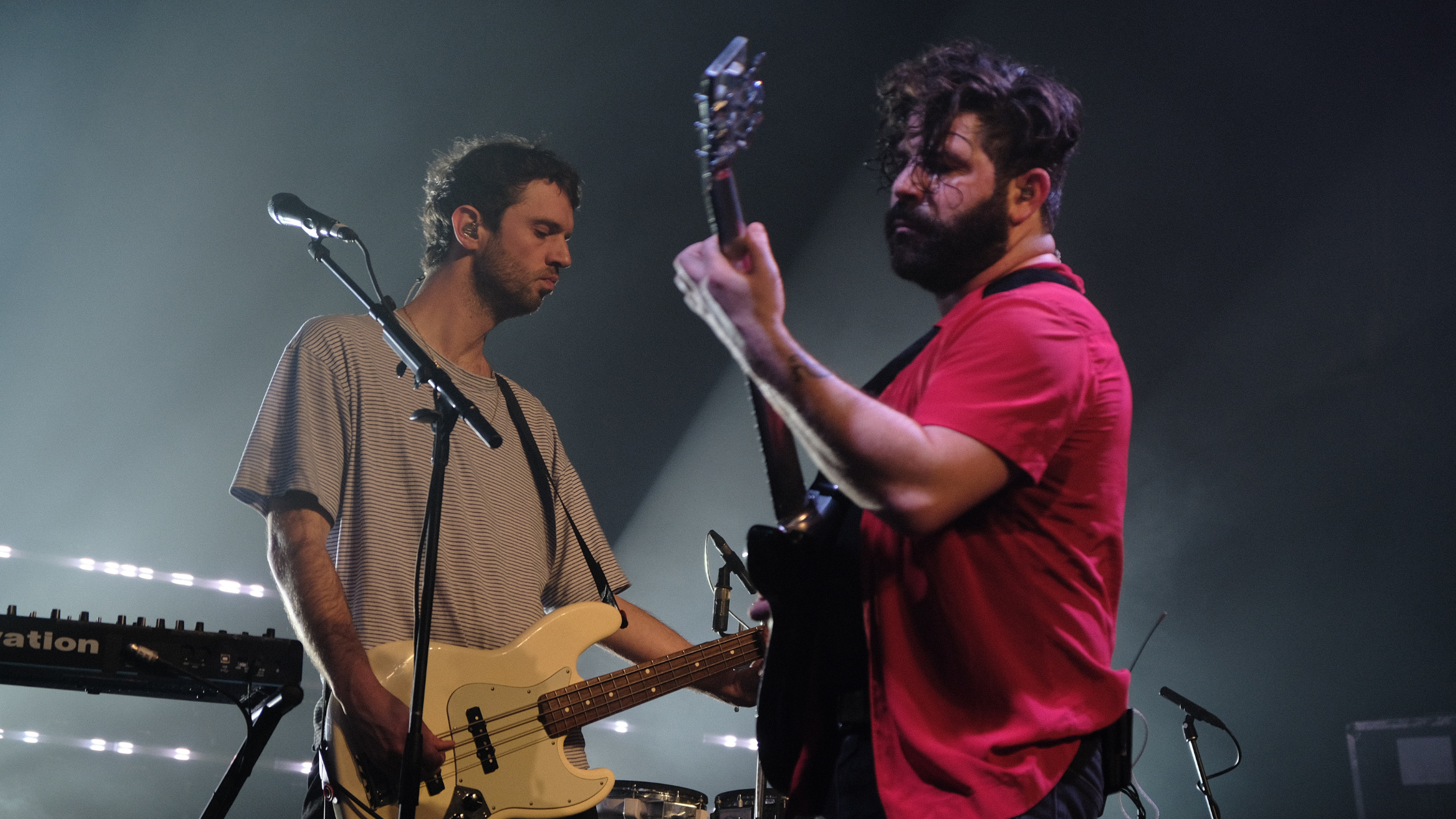 “For Foals to play a smaller venue seemed quite shocking to me, but it kinda feels quite intimate in a way,” says a concert-goer who flew from Florida after asking me where he could stash his coat. Snow was not the only thing he saw for the first time; he saw Yannis Philippakis face-to-face, swinging his guitar around at the tune of “Inhaler.” By the end of the show, he wiped his tears off his face, saying goodbye to me as soon as he found me in the crowd.

Foals were an important band for many millennials and early Gen Zs experiencing the robust, rich, yet invigorating birth of experimental, thinker’s indie. From the release of Antidotes in 2008, the band has secured a steadily growing and faithful following that consisted of pensive hipsters hanging out at an overpriced, backdoor coffee shop. To me and many others, bands like Foals unlocked our inner pretentiousness—which has, for the most part, played an integral part in crafting a perfect character arc filled with phrases like “I’m not like you, I listen to real music.” Jokes aside, their survival amongst an audience that is rather too difficult to please speaks for itself. They’re not just a passing name for those that claim they’re unique and special; they’re showmen who are capable of putting on a bombastic performance that everyone can enjoy.

The show began with Glove, who added their own flair of New Order-esque post-punk and electronica revival. Down to the way they dressed and presented themselves, they were a nostalgic time capsule that belonged in the flora of flowery bands in the eighties. Songs such as “Behaviour” and “Personality Change” are reminiscent of Ian Curtis’ deep, alluring voice combined with the depressing, dance-pop sound pioneered by Siouxsie and the Banshees and the Cocteau Twins. Although they are a fairly new name in the scene, only releasing their debut album Boom Nights in 2022, they truly cemented themselves as the next best thing that new indie and alternative music have to offer.

Inner Wave is a personal favorite of mine, so seeing Pablo Sotelo with his trademark trench coat on stage made me feel excitement and anticipation. There are some bands that make great music, but the crowd’s energy is always a problem when it comes to concerts and openers. Inner Wave falls under that category, where their music is laid-back, relaxing, and perfect for unwinding after a long day. In short, one might say that Inner Wave's music is a crowd killer due to the "chill" and lo-fi nature of their discography. To my luck, the crowd knew what to do. The moment Sotelo began to serenade the crowd with the first line of “Estrella,” a large circle of dancers began to jive and move around to the upbeat pace of the drums and the 8-bit licks from the synth. People swung their hips left and right, and by the time the band played the opening riff to “Take 3” on the bass, a massive vapor of smoke circled around the ever-growing pit of hazy dancers completely consumed by the ebbs and flows of Sotelo’s voice. Although I was a little disappointed that they mostly played songs from their recent album, Apoptosis, I was nonetheless enthralled by the opportunity to see them live. For those who enjoy the newer, laid-back, funky sound popularized by acts such as Kid Bloom, Crumb, and Gus Dapperton, Inner Wave should be on your radar as your next favorite band.

By the time Foals hit the stage, the entirety of the Queen Elizabeth Theatre was filled to the brim. I couldn’t see past anyone behind me anymore, and it was getting difficult to turn around or move my arms. Apart from the Florida man who flew all the way up to the Great North to see Foals, most of the crowd hailed from outside of Toronto. Prior to the concert, I was able to talk to one man from Nova Scotia and a team of boys who flew from Montreal. I met a group of friends who came from Seattle, and another from Lima. The point I’m trying to make here is that people came all the way from wherever they were to Toronto to see Foals, and it was very clear that they knew they were it the moment they entered. In a sea of flashing lights, Philippakis, wearing a bright red shirt, walked to the stage with an air of confidence that grew with the roars and cheers of everyone standing to see him play. Once a millisecond of “Wake Me Up” graced the large speakers on both ends of the stage, the entire crowd began to form mosh pits and banged their heads to the synth-dominated melodies of the track. With the way everyone was moving, one would expect the crowd’s energy to be reminiscent of a rave rather than an indie show; everyone was probably high off something, there was more dancing than violent pushing or two-steps, and the entire crowd devotedly seemed to know the words to each song. Equating a rave to Foals may seem outlandish for many familiar with the band's sound, but it made the night all the more exciting and remarkable.

Despite naming the tour after their newest album, Life is Yours, the band paid homage to the sound that got them on the map of many hipsters and music snobs alike. Surprisingly, most of the songs they played came from their 2008 debut album Antidotes, and their sophomore release, Total Life Forever. To be honest, Life is Yours is a complete departure from the intricate layering and careful craft of their older style—it’s quite commercial, laced with the typical chord progressions one would expect in a continuum of FIFA-showcased bands like Imagine Dragons, very easy to digest, and would probably play in the background of a local chain clothing store. The reception to their newer songs such as “2001” and “(summer sky)” also reflected the opinions present in many long-time Foals fans regarding Life is Yours. Instead of singing along or dancing to the music, they simply nodded their heads and diffused the large pit of dancers into individuals waiting for the band to play their older hits. Thus, for them to play songs such as “Spanish Sahara,” “Olympic Airways,” and “Red Socks Pugie” in a show that was meant to advertise their newer identity cemented the level of self-awareness and humility they hold towards their most loyal fans. In fact, the moment they finished “Black Gold,” Philippakis sweetly thanked the crowd for remembering who Foals truly were on the band’s behalf.

Ending the entire setlist with “Inhaler” and “Two Steps, Twice” was the perfect sendoff. Although the most memorable part of the show for many fans was Philippakis entering the crowd with his guitar, I definitely think it was being sent into a nostalgic trip to the sixth grade with the opening lick to “Two Steps, Twice.” The dissonance between the rhythmic riff and the electrifying entry of the drums was a musical experience that I would never forget. Listening to the track itself on a busy transit to campus was already enough to start my day, but hearing the band perform a song you’ve been listening to for so long adds another sentimental value to each word and melody. Everything was amplified right down to Philippakis screaming “let’s swim, lets’ swim, let’s swim this off,” and the choir of people who probably spent their own teenage years with Antidotes in their earphones crafted a sense of unity and belonging in me that I will never forget. Sure, I can tell my twelve-year-old self that I wasn’t special since many others have also listened to Foals in their youth, but I wouldn’t say it’s a bad thing to feel less lonely. Life is Yours, Foals say, and I can  confirm that not just mine, but many people’s lives were relived and experienced that night.

Tags:
foals
life is yours
2022
concert
glove
inner wave
queen elizabeth theatre
Other posts You might like
Playlists
Playlists