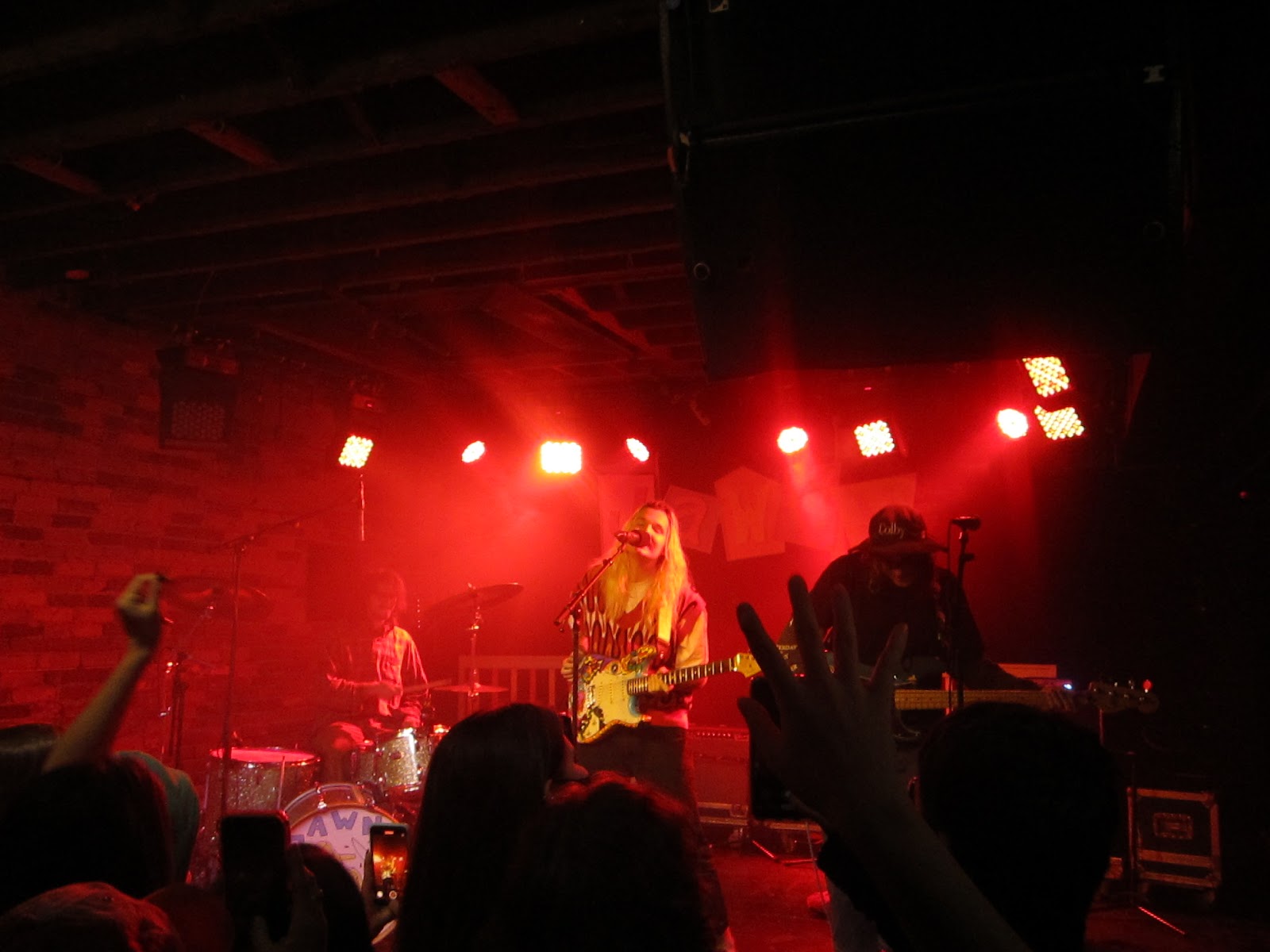 Who: JAWNY, opened by Sawyer Dust and Huron John

Where: The Velvet Underground, Toronto ON.

It’s your best friend’s party and he’s playing all your favourites. You’re singing along and dancing despite the people pressed against you, smiles all around as the strobe lights flare and the room gets hazy from the smoke machines, or maybe it's the Juuls pilfered in. Blink and you’re at JAWNY’s 2021 tour show at the Velvet      Underground, but it’s all the same. Everyone here is exactly where they want to be, and JAWNY is singing us a show that is at once warm, familiar, exciting, and hopeful. JAWNY’s concert is the first live show for many after two years of virtual concerts and live-streams, and for JAWNY, this is his first show ever in Canada. An indie-pop artist raised in Utah, JAWNY rose to fame with his hit single ‘Honeypie’ in 2019. His impossibly high range, heavy guitar riffs, and rock-inspired pop melodies are an instant favourite.

It’s an easy start as Sawyer Dust opens with songs made in his bedroom for listening ‘in the living room’. Dust is a natural, conversing with the crowd while playing his bass and handling his keyboard without missing a beat. The second opener Huron John steps up with his drummer Rick, and his rapid-fire lyrics, beats, and quips to the crowd have us jumping within the second song. Maybe it’s the people JAWNY’s music attracts, or the newfound appreciation in jamming to live music, but the crowd is very kind. We’re laughing, dancing with one another, and doing what an audience does best, making the performers feel heard.

In the moments between JAWNY’s appearance and Huron John’s final song, we’re screaming to guilty pleasures like Kesha’s ‘TikTok’, Black Eyed Peas’ ‘Boom Boom Pow’, and finally it’s Taylor Swift’s ‘You Belong With Me’ that whips us into a frenzy. Then suddenly JAWNY’s there with his shoulder-length blonde hair and orange sweater vest, grinning beneath two impressive handlebars.

When he can finally hear himself speak, it’s to applaud Toronto for being the liveliest crowd he’s had so far. The setlist starts off strong with ‘Honeypie’ and he’s smiling as he hears it being sung back. The performance features JAWNY’s latest EP, ‘The Story of Hugo’, and in between songs ands sips of water he’s candid. JAWNY talks about living up to the expectations set by the massive success behind ‘Honeypie’ and shows us the lovesong he wrote inspired by his newfound obsession with wrestling. The show is sincere and exciting, and he’s an entirely humble artist that makes us want to celebrate in his music as much as he does, and we’re giddy when he’s teaching us the parts he wrote for his crowds to sing along to during the show. Though ‘The Story of Hugo’ is available on Spotify, the live renditions of JAWNY’s EP is more rock and less bedroom-pop. The instrumentals take the foreground this time with a heavy hand on the bass and drums, refined with JAWNY’s high and pure vocals to navigate all that added dimension.

JAWNY finishes on a high note, with encores and promises of returning as soon as he can. He’s well on his way to his last show in Chicago but makes time for a few questions:

You started out being heard on Spotify and Tiktok. Is JAWNY live different from what we’ve heard online?

Live shows allow me to present my music in a way that I imagine when making them in the studio. I can bring the energy I wanted to in each track or the emotion I want to. If it’s an amped-up song we can jump around, if it’s an emotional song I can make it intimate.

First time in Canada, and what’s the verdict?

This first time I’ve ever been in Canada was insane… I didn’t necessarily know what to expect just because it was the unknown but the crowd was by far the rowdiest and craziest crowd of the tour. People were screaming the words to B-side songs that I didn’t think anyone listened to. I couldn’t have asked for a better welcome.

Until JAWNY’s back, check out his music on Spotify here: