Funkytown with a Sprinkle of Garage Rock: The Chili Peppers Take on Toronto 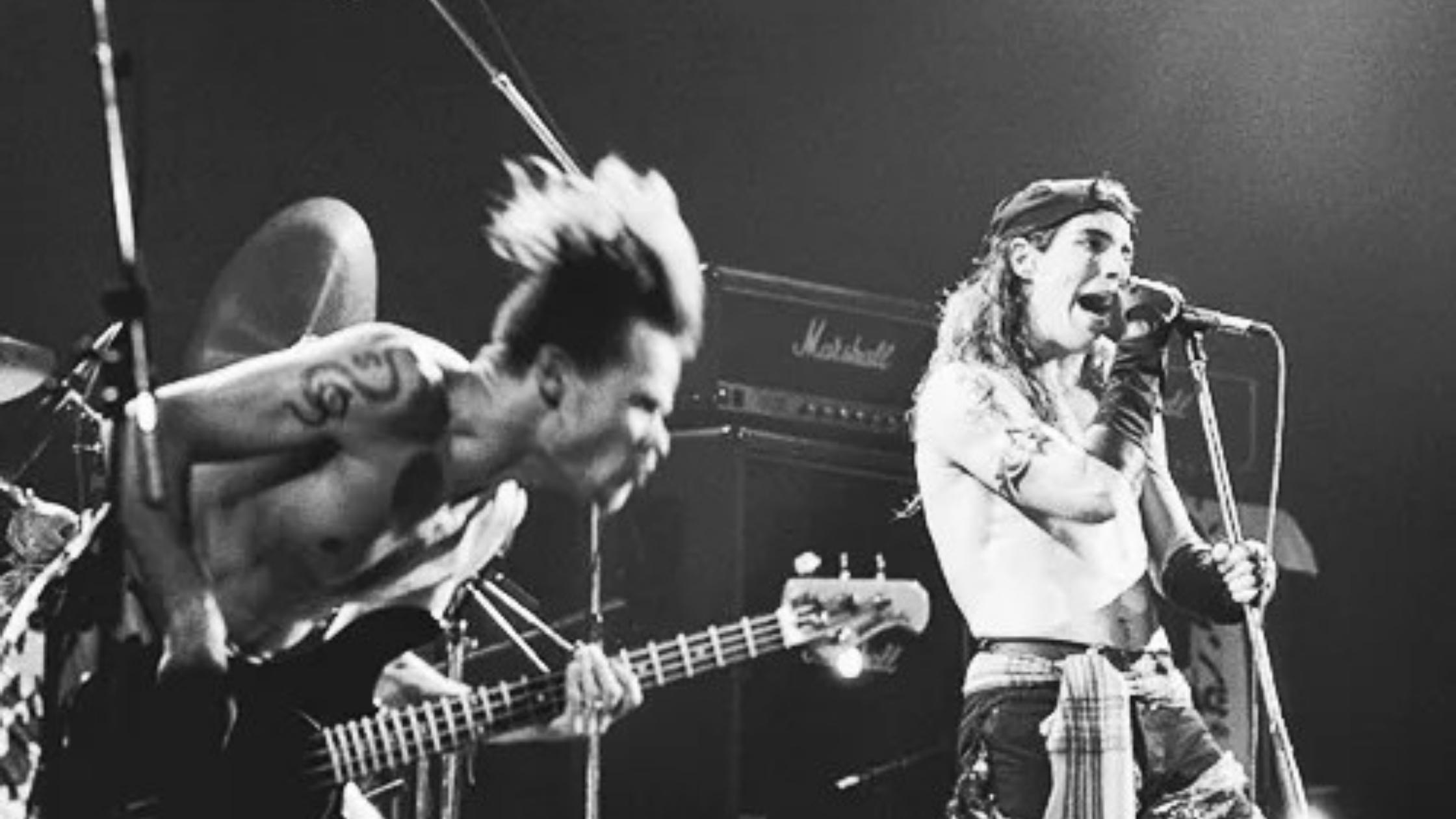 With guitarist John Frusciante back with the band, yet again, The Red Hot Chili Peppers triumphantly returned to stage at a packed Rogers Center on 21 August.

The crowd was an eclectic mix of ages; from older parents excited to see their favorite band from high school accompanied by their teenage or pre-teen children introduced to the Chili Peppers, to younger millennials in fresh merch especially anticipating a setlist filled with their newer songs from Unlimited Love. Fans were also excited to hear about the release of Return of The Dream Canteen, the band’s second album release of the year. With a vast majority of attendees in merch, the few without withstood long lines to get them. Amongst these fans were those especially eager to see the Chili Peppers’ opening acts: bass-virtuoso Thundercat and seminal indie-rock band the Strokes.

As people slowly settled in, the night officially began with Thundercat’s short 30-minute set, including songs from his Grammy-winning 2020 album It Is What It Is. Notably, “Innerstellar Love,” “Dragonball Durag,” and “Funny Thing” were performed with the technicality that his songwriting demands, while he and his band veered off into long stretches of experimentation. Thundercat’s signature bass tone (the fluid, thick, and glossy sound) seen on notable collaborations with Kendrick Lamar on his magnum opus To Pimp A Butterfly, and more recently, brought to Silk Sonic’s An Evening with Silk Sonic pulsed through the stadium. Closing his set with his 2017 hit “Them Changes” off  Drunk, Thundercat showed off his virtuosic ability on the bass, playing melodic yet enveloping notes while effortlessly moving up and down his six-string bass’ thick neck. Bringing the bass into the forefront, Thundercat established the funk sound that would come to define the night.

The Strokes and the Chili Peppers are not the most obvious pairing; the former was a New York-born indie-rock sensation that burst into mainstream rock pretty much overnight, while the latter was of the Seattle underground, and a whole other era and genre. However, the Strokes’ earlier retro, tight sound, is sure to appeal to many older Chili Peppers fans. Notably, the band’s recent Grammy-winning album The New Abnormal saw the band return to form with a blend of synthpop and their retro, melodic sound with the help of legendary producer Rick Rubin. With the album’s release, the Strokes invited much younger fans, some of whom are bound to enjoy Frusciante’s tasteful playing.

As people settled in for the night, the band returned to their classic debut Is This It, playing “Last Nite.” The crowd abruptly cheered, and people leaped off their seats as the song’s simple yet infectious opening riff blared through the stadium. The subsequent interplay between guitarists Nick Valensi and Albert Hammond Jr., and drummer Fabrizio Moretti’s tight, driving drum beats echoed through the stadium.

The atmosphere continued to be infectiously energetic as the band played “Someday,” “Hard to Explain,” and the rougher, punk-adjacent “Take It Or Leave It” just as tightly. Remarkably, Casablancas’ voice sounds as good as it did two decades ago, singing with the same cool detachment as in the band’s records. Notable additions to the set list include “Automatic Stop” and “Under Control” from their often overlooked sophomore album Room On Fire. Markedly different from the other songs on the setlist, the songs are slower and somber, which found die-hard fans singing along. As their set came to a close, Casablancas thanked the crowd as their 2003 hit “Reptilia” from Room On Fire started playing. Casablancas’ croon is at the forefront yet again as Albert Hammond Jr.’s technically impressive and catchy riff rings out in the chorus, a near-perfect close to a great set by a band that might just last as long as the Chili Peppers have.

After what felt like a lengthy intermission, the main event had finally begun. The instrumentalists were on stage first, starting with their usual opening jam. Chad Smith played with precision without sacrificing style and groove, showing incredible chemistry with bassist Flea and guitarist John Frusciante. Then, the trio slowly transitioned to the opening of their 2002 hit “Can’t Stop” from By The Way. As Frusciante’s guitar build-up reached its climax, frontman Anthony Keidis burst onto the stage as Flea’s punchy bass reverberated through the stadium.

Now middle-aged, the band nonetheless brought and consistently kept up their youthful energy throughout the set. Kiedis and Flea­ – both looking nowhere close to 60 despite being so – were of course shirtless, jumping around the stage with unbridled passion and energy for performing. Frusciante, long-haired and lanky, moved jaggedly, fully immersed in his instrument. Smith matched his bandmates’ energy despite being bound to his throne through enthusiastic and intense drum strokes throughout the set.

Moving into the more rock-centric “Dani California” from their 2006 album Stadium Arcadium, Frusciante’s slick and tasteful outro was a highlight. Playing yet another rock-centric but sweeter “Universally Speaking” from By The Way, the crowd was singing along with Keidis’ melodic voice in the chorus. They then moved into playing several deep cuts, including “I Like Dirt,” “Nobody Weird Like Me,” and “Throw Away Your Television.”

What followed then was the beautiful “Snow (Hey Oh)” from Stadium Arcadium. Frusciante led the song, making playing the rapid and technically-difficult opening riff look easy, as the beautiful riff anchored the song. Notably, in between songs, Flea would continually play his bass as he humored to the crowd with his usual banter. They also debuted a few songs off of Unlimited Love, highlights from which included “Black Summer," and “Here Ever After.”

In anticipation of the band's biggest hits, the atmosphere somehow reached bigger heights as the night came to a close. Iconic hits like “Californication” and “Otherside” had a majority of the 50,000 attendees singing along. With a smooth transition, the band returned to their popular live version of “What Is Soul,” by funk-pioneer Funkadelic. Amongst the highlights of the night for me, Flea’s thick, groovy bass paired with Smith’s mostly bare but powerful drumming laid fantastic foundation for Frusciante’s slick, liquid guitar tone. Keidis’ singing, while not a match for George Clinton’s eccentric and unique style, was appealing in its own right

The band then took from their iconic 1991 album Blood Sugar Sex Magik, playing the incredibly groovy and funky “Give It Away,” and the somber and reflective “Under The Bridge.” On the latter, Frusciante’s indelible playing shines, and Keidis’ raw and vulnerable singing cements the song as one of the Chili Peppers’ best. The atmosphere at this point was electric and stayed that way as the band played the final song for the night, their uber-catchy hit “By The Way.” During the verses, Flea’s extremely groovy riff made it impossible for people to remain still, while the chorus led to unanimous chanting throughout the stadium.

The Chili Peppers’ lasting popularity is in many respects astonishing. Rock has not been mainstream for decades, and yet, the funk-rock band continues to reach new heights with several chart-topping releases and sold-out stadium tours. They may not be in their prime, but one thing is for sure: they are here to stay.