Drezus and the Music that Made Him 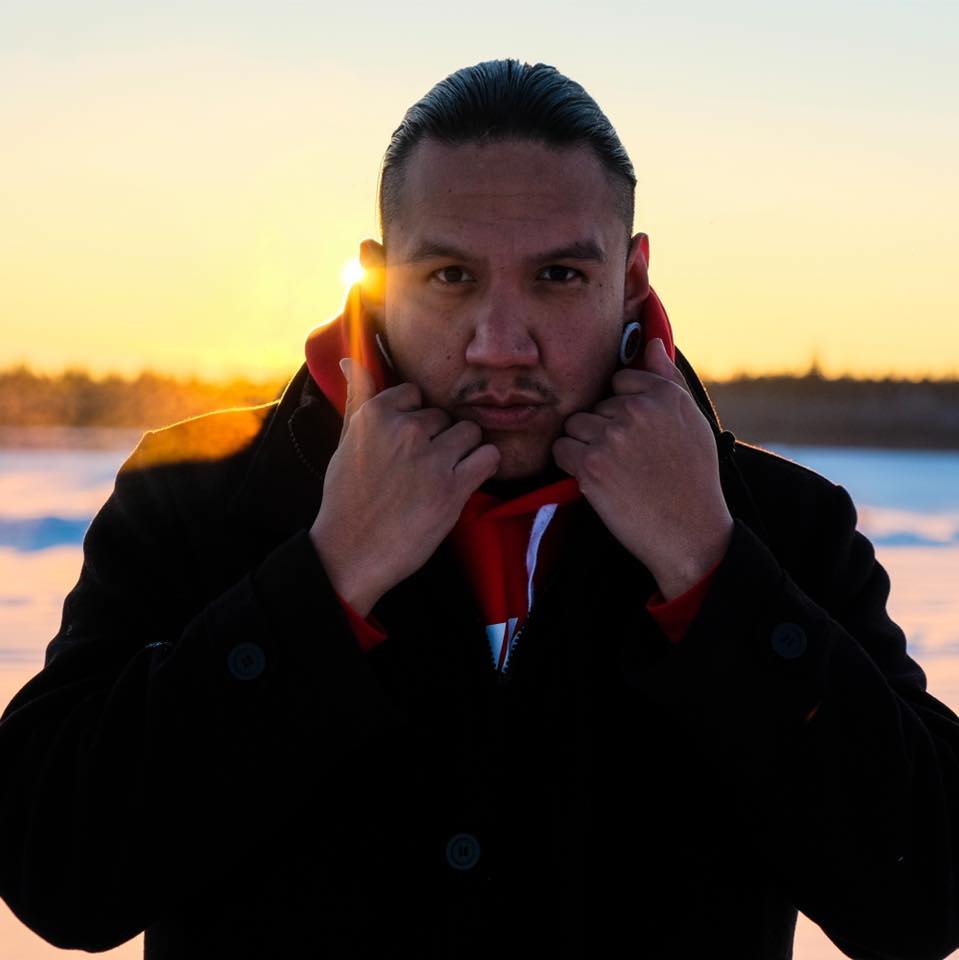 In a drafty room at the top floor of Hart House, Drezus—né Jeremiah Manitopyes—meets to speak with us after the Hip Hop 101 Café speaker series. Though he towers over most of the event’s attendants with his large frame, he does not intimidate. Rather like the smooth cadence of his voice and the warmth of his eyes, there is something patient and welcoming in his posture. In talking with Demo, he opened up about the music that made him and the people who paved his path to commercial success and cultural healing.

As a child, Manitopyes grew to understand the people around him through the music they listened to. Memories of those relationships, the comforting and the traumatic, are pieced together and retold like a collage over unique soundscapes. On the people closest to him, he speaks most fondly of his Uncle Robert.

“I called him Bobby Jones—I looked up to him all the time. When I was growing up with him, he was my dude.”

To Manitopyes, his uncle was everything he’d hoped to become and, like most children, his adoration manifested as imitation. “I like, used to go into his room and take his tracksuits and put them on and then, y’know, spin around and stuff like that and he’d be playing stuff for me that was mad old school.”

Unwittingly, Bobby Jones was the first to plant the hip hop bug in him. There in his bedroom, they’d sit together and listen to artists like Zulu, Pearl Jam, Planet Rock, and U2. Manitopyes briefly scans the room as he lists these artists. “Yeah, I’m just looking around for like, somebody old…!”

Much like his uncle, Manitopyes remembers his grandmother through the songs that she cherished. Leaning back in his chair, he closes his eyes and smiles, listing off gospel songs. Amazing Grace is one in particular that makes him reminisce, as his grandma would often play and hum along to it when he was around.

This habit of associating people with their musical taste has not skipped over difficult relationships. His father was an elusive figure who made both a profound personal and musical impact on Manitopyes. A country singer on the tour known as the “Red Circuit,” he and his music travelled to different reservations and Indigenous communities. “I associated country music with my dad—and he came around very seldom and he was drunk so it was almost like any time I heard that it would bring those memories back.”

Growing up under the care of his mother and extended family, Manitopyes recounts a rough upbringing in Saskatoon, and later Calgary. As he grew older, Drezus formed a similar bond with his peers: one that was inextricably tied to the music they’d listen to together. “Where I gained my hip hop knowledge was through [a] friend. We used to get into a lot of stuff, like crazy shit. But my favourite moments were—it sounds mad cliché—but were in the staircase.”

He flashes us a quick smile and recites “smoking bones in the staircase,” a lyric from Wu-Tang Clan’s 1995 track C.R.E.A.M. It is in this moment where his affinity for finding the lyrical parallels between hip hop and his own life is made clear. Though other genres influenced his early life, it was through hip hop that he learned to feel his way through teenage years. Much like the themes in resistance tracks from the likes of Ice Cube and NWA, Drezus’ experiences as an Indigenous person in western Canada meant fighting to be seen as more than a stereotype.

In those cramped stairwells, he and his friend would hide out from the businessmen who frequented downtown Calgary, ever-present with their critical gaze. This time is one that Drezus cites as an invaluable era of camaraderie and competition. There, they would quiz each other on hip-hop knowledge; his friend would quote lyrics from a newly released track and challenge him to name the artist. Manitopyes wasn’t one to lose.

“Every time we would leave the stairwell for the day, I’d go home and listen to so much hip hop, as much as I could find and look for. I’d go to the library since I knew that they had CDs and books that I could take in. I’d sit there in the library reading biographies in hip hop, just even looking at pictures, taking out CDs with my library card. I think they even had cassettes— that’s how old I am. So, I would listen to all these artists to get my game up. I would listen to stuff like Mobb Deep, Boot Camp Clik, Smif-N-Wessun, all these people at the time.”

Manitopyes would go on to find new mentors after beginning to perform at different venues, including a popular Jamaican club in Calgary. Shortly thereafter, he joined the Cree hip hop collective War Party. His freestyle skills and knack for lyricizing the tougher parts of his life with a raw sense of honesty left those around him astounded. He went on to find a fruitful career in the industry, but not without hardships littered throughout.

On finding his way out of the foggiest parts of his career, he speaks to the value of the support from the people he came up with. Somewhat of a traditionalist, Manitopyes reminisces about the days when the genre of hip hop was one of collaboration. The industry has changed dramatically since he got his start. He has become disheartened over the years, seeing the once vibrant and brimming with talent hubs across major Canadian cities lose their significance as part of the creative process. To Manitopyes, the overwhelming number of niche genres branching off of mainstream hip hop signals the trend of individual creation over the formation of collectives.

“You can make a song or video on your phone now, and it’s just so easy to put it out now. Because now everybody has this mindset of I don’t need you. So it's becoming these little seculars [sic.]— it’s almost like it’s breaking up the community man.” These changes are also reflected in how the industry operates and how few incentives there exist to work with other artists on a track. “We’re kind of at the mercy of the business. Of the dollar. Because they opened up these [streaming] platforms where anybody can put things out there and they’re cool with that because anybody didn’t have to go through the record label process, the recruiting process, BOOM they’re just making the money right there, already.”

This is not to say that his outlook on streaming services and hip-hop is wholly pessimistic. Though Manitopyes revels in the days of sifting through library CD selections, he believes there is something special in the way highly tailored playlists are being crafted by a new generation of artists and listeners. These days, new sounds are more readily available to find, and diverse artists are given a better chance at being discovered.

Being asked about the playlists he listens to most, Manitopyes beams and names Northern Bars, a playlist where he frequently finds new music from fellow Indigenous and non-Indigenous Canadian artists. Throughout his career, he has sought to elevate those around him, much as they once helped him navigate the industry.

Though he misses the energy of the hip hop community from when he was coming up on the scene, Drezus is hopeful that there will be a resurgence towards musical collaboration in the future. In the meantime, Manitopyes has continued to find community in his personal life. A father to four boys, he’s learned many vital lessons on how to be there for his children.

“I didn’t know anything about being a father for a long time, and I put my first two sons through a lot because I continued on a dark path and they saw that.”

After visiting schools in Northern Canada through his work as an activist, he witnessed just how impactful his care was on the lives of Indigenous children. “Every time I see a little boy or a little baby in these places, they always run up to me. I guess I’m Santa Clause or something... they show me love. It just— it broke my heart at first. Because of my kids… they weren’t getting that.”

With these insights, Manitopyes resolved to change his life in a dramatic way: “I just thought okay, this is what I’ve gotta do for my sons who grew up seeing me messed up. I can’t be hard on them for anything right now because they’ve just seen me in some crazy shit.” With the help of his partner, he committed to going sober and giving up drugs. At the time of our interview, he was nearing 1000 days without a drink. He is proud of the work he’s done, and believes he has a chance to be there “mentally, emotionally, physically, and spiritually” for his boys.

“As I start to learn more about myself and my culture—and actually working with other kids—it’s like, man, this is my training that my dad didn’t give me.”

On using music to navigate these relationships, Drezus notes that he is wary of being labelled and put in a box. After releasing his 2013 album Red Winter, the creation of which he credits as emotionally healing, he felt much of the mainstream were quick to limit his work and discuss it solely through a vague racial lens. “I am that guy because the public made me that guy, but I’m an artist first. I like to make music for myself. My new album is just a good vibe, but there are elements that show how I’m Native. I’m starting to learn how to get people to listen to deep stuff and they don’t even know it.”

I ask him how he feels now, after all of the difficulties of navigating a winding path towards becoming a better artist and father. There is a brief pause. Then he grins, lets out a content sigh, and freestyles a lyric: “You can’t take out the plug on my vibe / I’m really living.”

This interview was conducted with the help of University of Toronto students Rachel Huang and Benjamin Luu. Both asked insightful questions and contributed in a deeply meaningful way to this article. If you are interested in getting involved with Hart House, there are many virtual ways to participate. Learn more through their website.