Thank you! Your submission has been received!
Oops! Something went wrong while submitting the form.
Home
/
Music
/
New Releases

Best of the Toronto Metal Scene in 2018 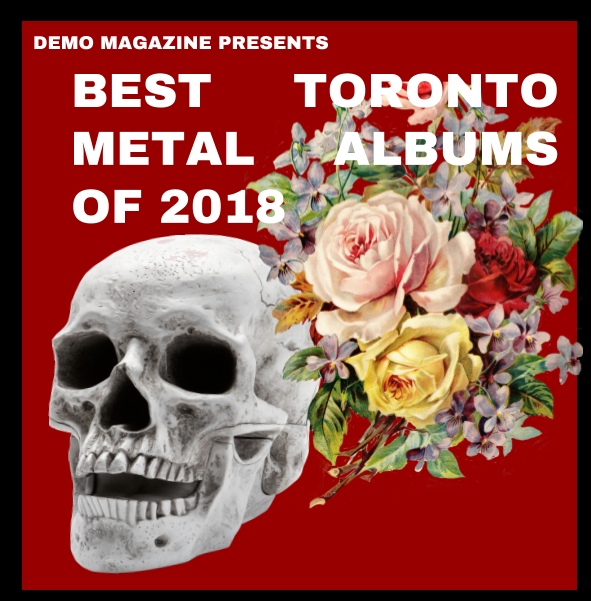 It’s been a mixed bag this year for Toronto metal:

a few local bands gained international acclaim, another venue (Coalition in Kensington Market) announced it was closing its doors, and the biggest headline came from a viral breakup post of a band nobody’s ever heard of. Regardless, there’s plenty of great noise coming out of this city this year–– no matter what microgenre you prefer, there’s sure to a local band to suit your fancy. Below are five of the best metal releases from Toronto bands to blast from your childhood bedroom while you hide from your family over the holidays.

Cellphone - Sinister Realities
Sinister Realities starts off with punchy, rubbery synths, indicating Cellphone’s 80s obsession. Complete with demo-quality vocals and enough thrash metal indulgence to satisfy all the aging Razor fans out there, this record is fast, ferocious, and actually throws some new ideas into the mix. It’s a reversal from their 2014 LP Excellent Condition, which ran more like a hardcore punk album with an overexcited guitarist, and a move which suits the band well.

‍
Nadja - Sonnborner
Luckily for drone metal lovers, Aidan Baker and Leah Buckareff put out a new release as Nadja approximately every eight seconds. While occasionally there are some meandering duds, their discography mostly remains rewarding and worthwhile. Sonnborner brings a heavy dose of post-rock composition to the table, flowing between crushing ambient riffs and serene, uplifting strings. The album is comprised mostly of one thirty minute suite, with four shorter tracks that allow Nadja to experiment with other sounds. The shorter songs range from black to thrash metal, but the band always retains the heavy distortion that makes their drones so effective.

Respire - Dénouement
At heart, Dénouement is a screamo record: gorgeous, passionate, and heartbreaking; but that is not all it is. Respire uses modern fusion sounds, which make albums like Deafheaven’s Sunbather and Oathbreaker’s Rheia so effective. This record is filled with shoegaze atmospherics, post-rock style songwriting, and a black metal foundation to devastate the listener. Usually this kind of stuff comes out of Québec, so it’s wonderful to hear Toronto embrace the style, especially when the execution is as excellent as on Dénouement.

Tomb Mold - Manor of Infinite Forms
If you’ve been following metal over the last two years, you should know about Tomb Mold’s exceptional rise following their debut EP. Heralded for their brutal sound and unrelenting energy, Tomb Mold updates 90s death metal for the modern era. They refuse to buy into gimmicky modern trends–– instead, they focus on perfecting their songwriting, which never feels tired or derivative. The production on Manor of Infinite Forms is crisp and wonderfully mixed to balance the growling vocals with the huge guitars. Distortion is used sparingly rather than as a crutch that many other bands rely on to give their record a heavy feel; Tomb Mold generate that effect with composition alone.

Vile Creature - Cast of Static and Smoke
Alright, they’re from St. Catherines/Hamilton, but come on–– Vile Creature fucking rocks. They’re sludgy, queer, and ready to dismantle regressive metal attitudes one riff at a time. For a two-piece, they make a huge amount of noise, especially given that they record their music live with only a drum kit and a guitar. With apocalyptic lyrics and drowning instrumentals, Vile Creature is leading the SJW metal revolution with reckless abandon.