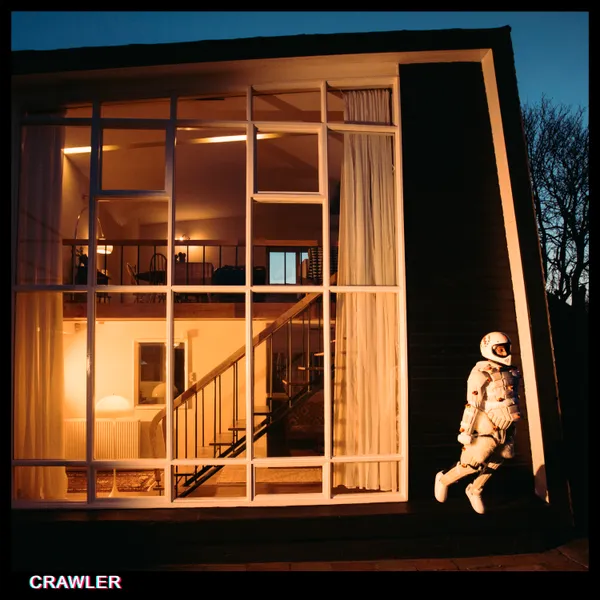 I fell in love with IDLES behind the quiet hypocrisy of a desk job. I was months deep in a 9-5, hidden away from the pandemic in my parents’ basement, isolated and gradually succumbing to an incessant barrage of neo-liberal propaganda. It was a single NPR Tiny Desk Concert and 5 madmen from Bristol that brought me outside again. IDLES was the band that taught me motorik and reminded me what it felt like to be furious.

Their new album, CRAWLER, caught me off guard a little with its first track, MTT 420 RR. Opening with a drawn-out subdued single-note bassline, I couldn’t help but wonder, how can I headbang to this? 30 seconds in, and not a single creatively shouted take-down of toxic masculinity had graced my ears. I wasn’t socking the establishment, I was descending in a flying car into a cyberpunk dystopia. And then the note changed…

CRAWLER is very different from their previous albums, the brilliantly named Joy As An Act of Resistance and Ultra Mono. But it’s still there; the rage that makes you snap off a necktie in one fell tug. They’re still angry. Tracks like “Crawl!” kick you right in the teeth and bottle the bouncer. For that matter, drums so hard they make your organs mosh are a mainstay on tracks like “The Wheel”, “Car Crash”, and “Stockholm Syndrome”. The riffs, the pugilistic vocal delivery, the unstoppable motorik are all still there, but there’s more experimentation and vulnerability than we’ve seen from the group in the past.

In “The Beachland Ballroom”, Joe Talbot croons over a soulful 6/8 swing that trades the customary brass of Stax and Motown for distorted guitars with heavy drum and bass hits on the downbeats. Inevitably, most IDLES tracks devolve into a cacophony of intentional chaos, but this one doesn’t. Instead, it builds in intensity with Talbot's singing voice, shown off to an unprecedented degree, as it mutates into a desperate howl in a resolute march forward.

Other tracks defy expectations, like “When the Lights Go Out” which combines reverb-drenched guitars and simple driving melodies reminiscent of bands like The National. Two-note guitar riffs fit right in and entrance the listener into a post-punk soundscape complete with cryptic lyrics, and a relaxed, almost drunk delivery. Meanwhile, the synth interlude “Kelechi: drops the drums and overdriven guitars in favour of a mysterious glitch-ridden sequencer only to pull you into “Progress” and its processed acoustic guitar melodies and ominous vocal backings. Still, its almost arrhythmic stumbling and sombre lilt manage to tie together the album’s more brooding future punk sounds with its tried and true punk stylings on tracks like “Meds” and “King Snake”.

IDLES also goes heavier on CRAWLER, with its absurd 30-second self-parody “Wizz” and quasi-Black Metal growling on “The End”. This all comes together to delightful success in an album that shows off more of what the artists are capable of all the while expressing a wider array of feelings and sounds.

A few words and phrases are stuck in my head from the album. “Damage.” “I don’t wanna feel myself come down.” “The kids are not alright.” There’s a lot of pain here that was always in their music but was never as raw. In an interview with FLOOD Magazine, Talbot opened up about his struggles with addiction and the stillbirth of his first child. He talks a lot about changing and recognizing his place in the universe, something I’m sure most of us can relate to.

CRAWLER is very different from Joy As An Act of Resistance and Ultra Mono, sure. But haven’t we all changed since the pandemic? We’ve survived some of the worst years of our collective lives, estranged from friends and family as necessitated by the survival of our species. I certainly changed, trapped inside watching the world around me burn between episodes of Tiger King. It sounds like IDLES has too.