A Good Interview with A Good Band

A Good Band discusses their songwriting process, COVID-19, and the importance of positivity in turbulent times 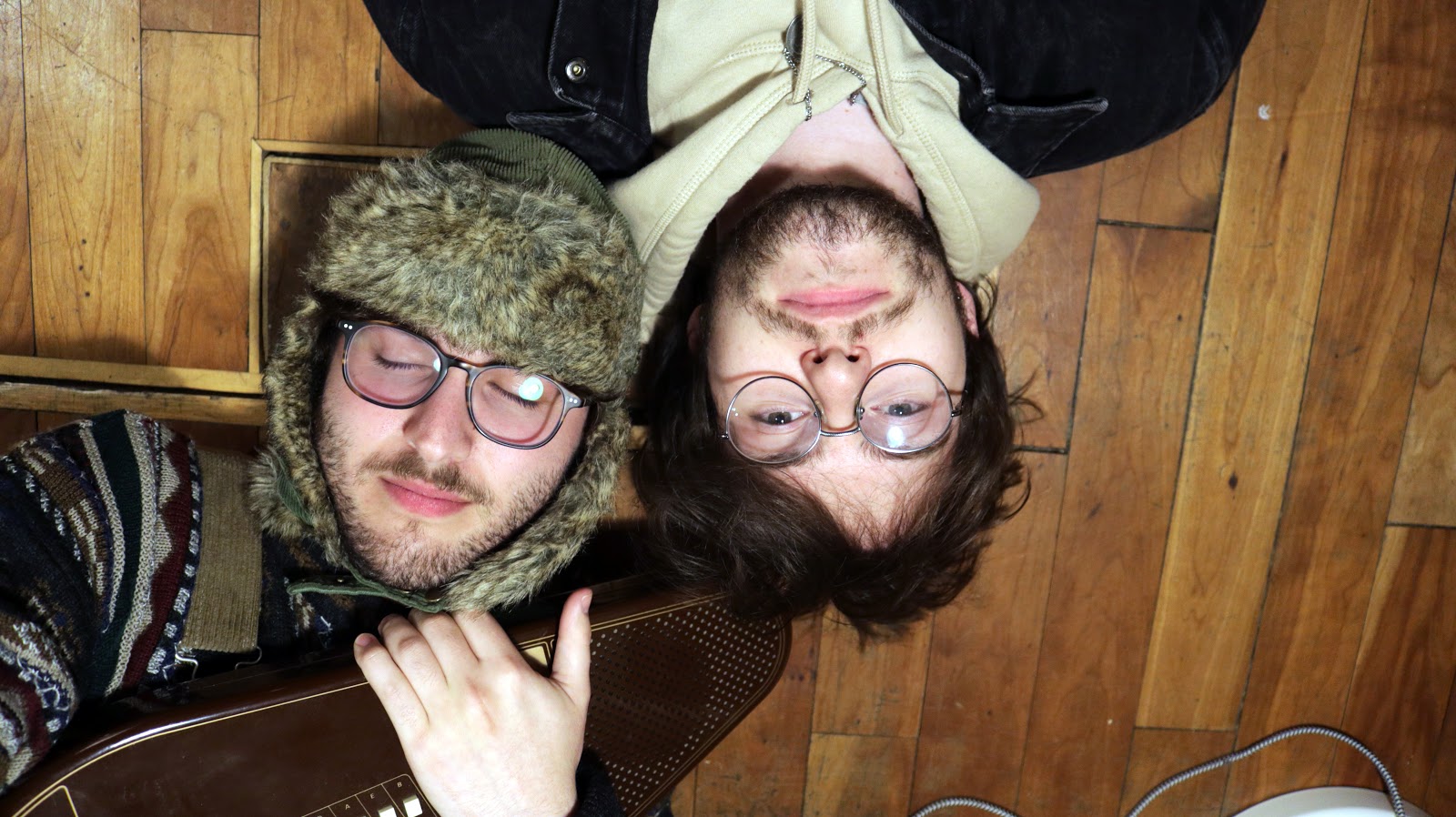 A Good Band is a Toronto-based outfit currently residing in Montreal and a signee of the newly-formed Corn Puff Records. The group consists of Ryan Litvak, who handles the songwriting, vocals, and guitar, and Maximus Delmar, responsible for the keys, percussion, and production. Litvak and Delmar met in residence during their first year at Concordia University and now they’ve embarked on a new musical project hoping to create some nice tunes for these hard times. They have released two singles so far, “All My Pants” and “Tinder is My Girlfriend”, with more music coming soon. I interviewed A Good Band via video chat, due to the nation-wide quarantine, and we delved into their songwriting process, the impact of COVID-19, and the importance of positivity in music right now.

Harry Myles: So your first single “All My Pants” is about your pants having crotch holes in them. Can you go into the songwriting process for that song?

Maximus Delmar: Well our process has stayed pretty much the same for most of our songs. Ryan will come up with an idea and he’ll jam with himself and try and figure it out and then he’ll present it to me. If I like it then we’ll record stuff and I’ll do all of the editing afterwards.

Ryan Litvak: I have a guitar and mess around and the lyrics will come at the same time. Either it happens or it doesn’t. If it doesn’t happen and the song isn’t that good then maybe it goes away and stays in it’s corner forever and never breathes fresh air. But maybe it’s good and then it gets on Spotify. In terms of process, I like to work with stuff that’s real. Things that are happening in life. So last semester I was in a place where all of my favourite pants from the last several years had crotch holes. I was really genuinely upset until I thought “wow, that would make a really great song title.” Then I took a crack at trying to write it and it just didn’t happen and then I took another crack at trying to write it and it just didn’t happen and maybe a week later I sat down and picked up my guitar and the song just kind of happened. It kind of wrote itself. Then I brought it to Max. But I think we’re trying to be a little more collaborative going forward.

MD: I don’t have a lot of songwriting experience but I’d like to do more. We also have some talented friends that we’d like to bring in. Our process isn’t set in stone.

RL: I think that something that is important to A Good Band is the inclusion of people in our lives and creating a sense of community behind this thing. So you might hear a lot of voices that aren’t ours floating around that will hopefully create some sense of that community. There’s a lot outside of us.

MD: If there are any two focuses within the music itself, they are the guitar and the vocals and then there is stuff that is added around it to kind of flesh it out. But I think when we record, those two elements are the most important. That’s where the heart of the song is. None of the music content itself is crazy complicated. I don’t want to say simple-

RL: Well it is simple.

RL: Yeah in the world right now, if we can just sit down and write a song about our pants having crotch holes, as if that’s the sad part of the song, that’s the thing that’s really upsetting me and not any number of real issues, maybe it can put a smile on someone’s face.

‍HM: So is that what you’re going after then? Not necessarily songs that delve into the deep political tensions we have but something that acts as almost a form of escapism?

MD: Well I guess what more am I going to say about the American election that hasn’t already been said? What can we really add to that? I feel like what we can do is make these fun songs and maybe take peoples’ minds off shit for a little bit.

RL: But I think the word “escapism” can be kind of dangerous. Because if you’re using positivity as a form of escape then you’re not present for what’s actually happening in the world and we don’t want to take people away from what’s actually happening. But, maybe if we can add some positivity and joy and if we can remove some level of fear, then that’d be beautiful. You know, that’s all you can hope to do really.

HM: I also wanted to ask about the Tinder song, “Tinder is My Girlfriend.” Am I wrong to assume that Tinder was the inspiration behind that song?

RL: No, well actually I guess I was in the shower when I came up with the phrase “Tinder is My Girlfriend” and I thought it was kind of funny. I don’t want to talk too much about the song and give meaning to it because it’s simple and the lyrics are funny; I don’t want to go into the meaning or the poetry of it.

MD: Well, what I took it to mean is that I’ve heard people talk about Tinder like it’s a game.

MD: And you just swipe and it’s like I’m dating this app more than people.

RL: Exactly. The people you see on Tinder, sometimes they feel empty and it’s like this virtual reality video game where the goal is to plan to meet. But I personally feel on Tinder as though  you can talk to someone for so long and plan a meeting and that’s it, it’s like you’ve won the game. The meeting doesn’t even have to happen. Ideally it won’t because you don’t actually want to meet these people, you just want to know that you can. If someone messages you on Tinder and says “Hey, do you want to go out for drinks?” then I just won Tinder and I can delete it. And that’s kind of the song.

‍HM: I can see that. Now, I wanted to ask about Corn Puff Records; how did you first get connected with them?

MD: We were reached out to by Ryan’s brother, Joey Litvak of the Corn Puffians. They wanted us to be kind of frontrunners for this new project, Corn Puff Records.

RL: Joey is a talent scout for Corn Puff Records, but we have had no contact with the co-founder Joe Alexander. Joe Alexander has not personally reached out to us. We’ve reached out to Joe Alexander and we’ve received no reply. We only know what’s happening through Joey which can be very nerve racking because there is a lot of uncertainty, a lot of things up in the air. But I’m sure Joe Alexander is a nice guy.

HM: Why do you feel A Good Band is the right fit for Corn Puff Records?

RL: I like Corn Puff Records and Corn Puff Records likes us. So it’s good to be with a label that likes the stuff that you’re doing and at the same time you can feel very proud to be on a roster with the likes of Amelia Ear Heart’s Sonic Aviary and Nonna Sings. They’re incredibly talented people and it’s a privilege to have our names next to theirs.

MD: I think it’s great because we don’t have to try and fit any shape. We have the freedom to just make stuff and it gets put out. There’s not too much stress regarding the creation of the art.

HM: In terms of the future, can we expect more songs or an album anytime soon?

MD: Yeah, we have a little collection of songs. I’m not going to talk about the length or the number of tracks. But we got more coming. The coronavirus is not going to stop this train from getting to the station.

HM: On that subject, do you think that the coronavirus has impacted your recording process or your songwriting?

RL: I think this is a very interesting time that we’re living in right now and I hope that A Good Band can make some good music to make people happy in a time that can be very scary.

MD: I want A Good Band to feel like the new Animal Crossing. But in terms of how the virus affected the process, as part of my major I have access to a studio, a lot of microphones, a lot of equipment. We were expecting to do a whole studio session last Sunday [March 15] for four or five hours. But everything got shut down the Friday [March 13] before we were scheduled to go in which meant we didn’t have access to any of those microphones, none of that. So we ended up doing a session in our basement and I borrowed some microphones from a friend of mine and we just did the most with what we had. I actually preferred it better that way.

RL: So we had the wonderful opportunity to take this room in our basement that we’d just been using for storage. Now we have this little basement studio space that we’ve been working in. It's very homey.

HM: And where did the name A Good Band come from?

RL: We kind of just thought of it and then thought that would be cool and funny and went with it.

MD: There’s not really a story, it just kind of happened.

RL: I will say that our album may be disappointing, but that’s all I’m going to say.

HM: Thank you for your time and stay healthy out there.