Thank you! Your submission has been received!
Oops! Something went wrong while submitting the form.
Home
/
Guides
/
Local News

A Conversation With the Sensational Steve Hamelin of Born Ruffians 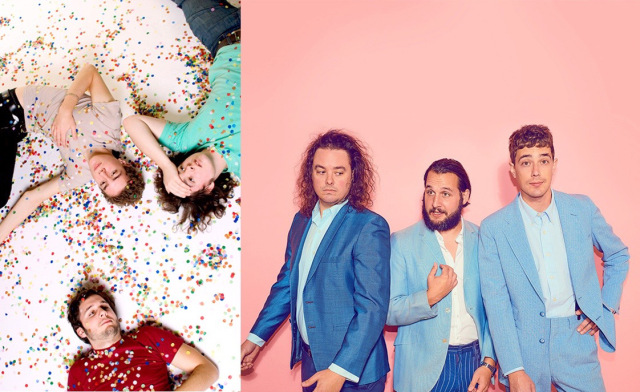 The Toronto-based band Born Ruffians first joined forces in 2004 after high school friends Luke Lalonde, Mitch Derosier, and Steve Hamelin saw a rousing performance by the Strokes on Saturday Night Live. Out of this shared moment, the three-piece rock outfit formed amidst the post-punk revival movement of the early 2000s. The band concocted a unique style, assuming the punchy attitude and spastic sounds of bands like the Pixies and Talking Heads, harmoniously strung together by an indispensable indie-pop sensibility. After 14 years and numerous studio albums, Born Ruffians returned on February 16 with their fifth offering, Uncle, Duke & The Chief.

Filled with just as much angst-ridden oomph and gusto as their previous records, the band’s latest release has the Ruffians written all over it. On Uncle, Duke & The Chief, the trio truly refine their signature “herky-jerk” sound, as producer Richard Swift (Foxygen, the Shins) brings his vintage rock & roll flavour to their Red, Yellow, and Bluecoloured palette. Subtly scaled-back sounds, seasoned subject matter, and a concise, no-nonsense track-list see the Born Ruffians re-emerge with a newfound sense of confidence and an unparalleled musical power.

In support of Uncle, Duke & The Chief, Born Ruffians have begun a four-month world tour, including a five-night stay at Lee’s Palace from April 4-8.

With Uncle, Duke & The Chief marking drummer Steve Hamelin’s full-time return to the band, Demo got the chance to catch up with Steve to discuss the Ruffians’ creative process and their latest album.

What made you decide to rejoin the band after such a long break?

Steve Hamelin: That’s a good question actually. I just missed it; that’s the truth. I left and finished a degree at UofT and I was working on Ruff [the band’s fourth album] while I was studying, so I was still writing and recording with the guys. I guess I still had my foot in that world and I just realized once I graduated that I spent so many years of my life playing music that I truly missed playing live and being a full-blown member of the band. The guys were more than willing to have me back, so it seemed like the right time to do it. Things were going really well creatively amongst us, just like when we got together and wrote Red, Yellow, and Blue [the band’s first record]. So, I guess saying I missed it is the short answer.

Has the creative process and band dynamic changed since you were last with the band full-time?

SH: Yeah, I would say it’s changed. I think this is the most fruitful and easy it’s been since Red, Yellow, and Blue. Songs were coming out easily and everyone was relaxed, so the process changed back to what it once was.

Your new record was produced by Richard Swift. Did he approach you to produce the album or did you seek him out?

SH: We approached him. We like his stuff and what he’s worked on. For whatever reason, Luke had a gut feeling that Richard was the right guy to bring the album to life, and he was.

On previous records, you’ve worked with Rusty Santos (Animal Collective), Roger Leavens (Rural Alberta Advantage), and Jeff McMurrich (Constantines). How was working with Swift different from these other producers?

SH: I think Richard was the most forceful producer we’ve worked with, but in a good way. He’s a pro and has produced for a lot of great bands, so he was comfortable asserting himself. He would add a part here or tell us “no” there. You can actually hear him on the last track [“Working Together”] telling me how he thinks the drumming should be. That was what we really liked about working with him. We always have these ideas and demos where we kind of get lost in our own world, and he was the extra voice we needed to bring it all to life. A lot of the other talented producers we’ve worked with left us to our own devices, but Richard really controlled the pace of the sessions and he was an important part of the whole process.

Did you have an idea of what you wanted Uncle, Duke & The Chief to sound like before the recording sessions?

SH: We had the collection of songs that we were going to try and tackle with Richard, and we obviously knew what he brought to the table, so we had an idea of what the record might sound like. Richard completely captured the sound that we wanted, so depending on the type of producer you pick, you know what you’re getting into because you can listen to their other work.

This approach seemed to create a greater sense of direction and structure for the record. Is that something you wanted for Uncle, Duke & The Chief?

SH: Absolutely! Yeah, that was a conscious thing going into recording. It was a really good 10-day vibe.

You recorded the entire album in 10 days?

SH: Yeah, nine songs in 10 days! So if that doesn’t tell you how well it was going, I don’t know what else will. [Laughs]

Your previous records have been pretty consistent, running at about 45 minutes each with 11 or 12 tracks while Uncle, Duke & The Chief features nine songs, clocking in at about 30 minutes. Was there a conscious decision to create a shorter track-list for this album or did it just work out that way?

SH: It was a little bit of both. There was always this idea going into it that we didn’t want to put out an extremely long, over-blown record. It’s nine songs and 30 minutes long because those were the nine songs we did with Richard. Once we left the session, we knew that this was the record. It felt like we captured something that we didn’t really want to mess with after that.

That’s really interesting when you consider the prominence of streaming services and how a certain amount of streams count for a record sold. It seems like you guys aren’t really concerned with that side of music?

SH: [Laughs] I guess we’re doing the opposite of that. I’ve heard that people are releasing these super-long records to make it count for more. But with a good short record, you just go back to the top and play it again. That’s better for us anyway.

It seems like Born Ruffians are just now getting into the world of streaming? Uncle, Duke & The Chiefreceived a lot of promotion from streaming services like Apple Music and Spotify.

SH: Yeah, exactly. Well, that’s because things are changing and our manager is really conscious of that. We still like albums and records, so for us, we really thought of Uncle, Duke & The Chief as an album. The idea of releasing something super-long for more streams doesn’t fly with us. I don’t think you’ll see a two-hour-long Ruffians record just to load up those streams.

That’s amazing. Your artistic integrity is more important than the streams?

SH: [Laughs] For better or for worse, if that’s not too bold of a thing to say? We still really care about the record being released on vinyl and we consciously laid it out knowing what song will close side one. We’re definitely conscious of streaming, and getting playlisted is always great since we know that’s how you can reach a lot of people.

You collaborated with Leah Fay Goldstein and Peter Dreimanis of July Talk for your new music video trilogy. Where did the concept for these videos come from?

SH: It was kind of like a joint brainstorming session, but the genesis definitely came from Peter. The whole thing was written around this vision he had for “Forget Me.” From there we just tied in the other two songs and videos to make a trilogy. We wanted all our videos to have a similar feel. In the past, we’ve been kind of scattershot with our videos. We’d have a different director here a different concept there, and it was frustrating because a good song could be wrecked by a poor video. I’m not passing the blame onto anyone else, but we care so much about Uncle, Duke & The Chief. We wanted to make sure that every video could hold up on its own and wouldn’t taint the songs, and Peter was the perfect go-to for that.

Based on your album art and music videos, Uncle, Duke & The Chief seems very aestheticized. Can we expect to see this reflected in your upcoming live shows?

SH: Hopefully! That was always the goal and that was always thought about ahead of time. There are practical things that come into play, like space, the budget, and all those other boring things. But we have a plan to keep a coherent aesthetic in every way we can, even if it’s just in the band’s wardrobe. We really want to keep the vibe we’re going for.

SH: Oh man, as boring as it sounds, it’s just experience. We’ve released a lot of albums and made plenty of mistakes. We’ve seen a lot of what to do and what not to do, so we’re approaching every step [of releasing, performing, and recording] with that attitude and those experiences in mind. We’re still making the same dumb jokes we always have, so in some ways, we’re the same as we were back then. If Uncle, Duke & The Chief really kicks off, I think it’s the right time for it to happen. We’re all in the best headspace we’ve ever been as a band, so things are better now than when we were 18-years-old and ready to crumble.

Looking forward, what can we expect to see for the future of Born Ruffians?

SH: Well, I will say that the writing sessions that went into Uncle, Duke & The Chief produced a lot of songs that we are really happy with. The nine that appear on the record were the nine that felt right to do with Richard at the time, but they are not the only nine songs that we had ready to go. We’ve actually had some time off between tours, so we are doing a little playing around in the studio. We’re really looking forward to the next couple of years.

Well, that’s great news! We just have one last question for you; if you could choose the title for this interview what would it be?

SH: [Laughs] You want me to do your job? Whatever you call it, just make sure it’s sensational.

Edited and condensed for publication