Thank you! Your submission has been received!
Oops! Something went wrong while submitting the form.
Home
/
Music
/
Song Reviews 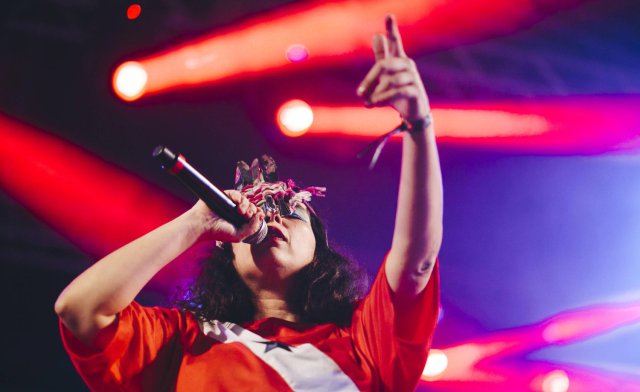 Rock is dead, which is fine because it means the rulebooks have all been burned up alongside the guitars and aging groupies. Luckily, the internet and lack of platinum expectations has led to wilder experimentation in recent years. Once long-forgotten, niche scenes are more accessible than ever, resulting in strange fusions between genres and allowing music nerds to slap bands together faster than Bandcamp can handle. The following is a collection of albums from 2018 that embody the essence of rock music, while deviating in strange and often extremely noisy ways.

The Armed – Only Love
The Armed has been making high quality metalcore for almost ten years now, but their latest LP cranks the maximalism dial up to eleven and shocks it with 10,000 volts for good measure. Every riff is bitcrushed and overclocked to ensure total madness, leaving the listener exhausted and crying in the fetal position. The approach is reminiscent of the unadulterated aggression of digital hardcore group Atari Teenage Riot and their late 90s contemporaries. The second half of the album contains some surprisingly lovely movements and melodies, but refuses to allow for complacency and pummels the listener with fresh terror every time they get comfortable. The added electronics give The Armed the necessary space to experiment wildly with their brutal formula, catapulting them ahead of their peers.

The Black Heart Rebellion – Plays A Girl Walks Home Alone at Night
Remember when The Black Heart Rebellion was a screamo band? Though the band’s debut capitalized on late 00s “post-everything” instrumentals, their core sound was founded on the simple pleasure of listening to a tortured soul grapple with existential anguish. Fast forward ten years and the band has become increasingly experimental–– Plays A Girl Walks Home Alone at Nightcombines layers of thick, murky, ambient rock with terrifying percussion, and the occasional full-frontal sludge assault. The album is also an alternative soundtrack to director Ana Lily Amirpour’s self-described “Iranian vampire spaghetti western” of the same name–– TBHR performed their original compositions live at screenings of the film across Europe. Endlessly dark, the album is an anxious array of drones and drama, infused with Middle Eastern tones and timbres.

Lithics – Mating Surfaces
Portland punks Lithics return with a sophomore effort of minimal, atonal freakouts that remain as funky as ever. Taking cues from the no wave side of post-punk, most of the serviceable melodies come from Bob Desaulniers’ slippery basslines, while Aubrey Hornor’s guitar squeals together with her deadpan, monotone vocals (which are accompanied by an unwavering death stare during live performances). The album grooves along like a Liquid Liquid EP, but with breathing room for Sonic Youth-esque noise jams. Be prepared for fits of uncontrollable jerk dancing, accompanied by nervous, paranoid shuffling during the slower tracks. With bands like this popping up, maybe David Thomas will finally be allowed to retire.

Messa – Feast for Water
The new millennium has been good to doom metal, and many of its greatest releases have stuck closely to rich traditions of the genre. This is not the case with Messa. The group adds eerie, dark jazz elements to their compositions, infusing the typical riffs with ethereal drones and Rhodes piano. Enigmatic vocalist Sara provides rich crescendos and haunting interludes to accompany the heavy instrumentals, spaced with washed out lounge vibes. It’s a tense affair which requires patience, but the highs are brimming with enough chunky guitar to entertain even the most stalwart of warlocks.

The Messthetics – The Messthetics
Brendan Canty and Joe Lally, the legendary rhythm section of Fugazi, are back on Dischord, this time supporting the improvisational efforts of experimental jazz guitarist Anthony Pirog. As The Messthetics, the instrumental trio grooves their way through various jams, ranging from punk tinged jazz-rock cuts to more atmospheric and noisy dreamscapes. Cutting in at 34 minutes, no single idea overstays its welcome, giving the record a stripped-down Mars Volta effect.

Oneida – Romance
On Romance, Oneida crafts kooky and kraut-y jams that, while somewhat formulaic, remain frenzied and organic. Excitable drum fills and piercing guitar bursts smash their way into motorik beats and looped grooves, smattered with gothic vocals. After more than 20 years and almost as many albums, it would be understandable if the Brooklyn rockers wanted to refine their sound; instead, they remain patently opposed to convention. The group is just as fond of noisy drones as ever, and throw in a bare-knuckled pub rock chugger (lovingly titled “Cockfight”) just to ensure you don’t start to zone out.

Ava Rocha – Trança
Ava Rocha takes full advantage of the new wave of experimental Brazilian musicians on Trança. The singer-songwriter collaborates with Kiko Dinucci and Juçara Marçal from avant-jazz band Metá Metá, along with deconstructed-club-hop purveyor Linn da Quebrada to bring expansive life into this sophomore album of post-tropicália delirium. Trançais filled with earthy, off-kilter tracks featuring diverse percussion and Rocha’s singular voice, but frequently diverts into strangulated noise outbursts and dense, punctuating instrumentation. No two grooves are alike, creating to an unpredictable flow that makes sharp turns without notice. The soul of the album remains rooted in the late 60s, when Os Mutantes and Gal Costa were importing and repackaging the wildest Western noises while revolting against an authoritarian military regime. Don’t worry about naval-gazing pretentiousness ruining the mood, either–– Rocha inserts some lovely dry-heaving about halfway through the album to keep things grounded.

Tropical Fuck Storm – A Laughing Death in Meatspace
Some mysterious force in Australia is churning out garage bands with outlandish names, from the infamously prolific King Gizzard & the Lizard Wizard, to Perth’s Psychedelic Porn Crumpets, but newcomer Tropical Fuck Storm surely takes the cake. Something of a local supergroup, the project features members from outstanding bands as The Drones and High Tension. The result is a deranged, blubbery album of noisy punk and blues riffs, anchored by some of Gareth Liddiard’s most sarcastic and nihilistic lyrics to date (including a track entirely dedicated to Deep Blue’s defeat of chess grandmaster Garry Kasparov in 1997). The perfect soundtrack to a bad trip, A Laughing Death in Meatspaceis as captivating as it is manic.

Xinlisupreme – I Am Not Shinzo Abe
Under the name Xinlisupreme, Yasumi Okano’s 2015 release 始発電車The First Trainshould have been his crowning achievement, a beautiful and terrifyingly noisy pop album that took the internet by storm. Instead, the album received massive domestic backlash for the track “I Am Not Shinzo Abe,” a protest song against the reigning prime minister of Japan. The resulting public demonization of Xinlisupreme led to the removal of all of his music from Japanese outlets and termination of his record deal. Rather than pull back, Okano has reworked those tracks into a new release, where he doubles down on the protest themes and adds additional material from previous EPs. Enjoy the sun-drenched J-pop melodies while they are battered with torrents of harsh noise feedback and suffocated by layers of short-circuited shoegaze. Power electronics never sounded this pretty.

Zeal & Ardor – Stranger Fruit
As the story goes, Zeal & Ardor mastermind Manuel Gagneux asked for absurd genre combinations on 4chan so as to practice his musicality and expand his creativity. The combination of black metal and black spirituals seemed as outrageous as any, but three albums of material later, the Swiss shredders have proven it to be a winning combination. Gagneux’s clean vocals are as tortured and despondent as the violent shrieks and growls, and every handclap feels just as rebellious as blast beat. Running as a sort of twisted parallel to Algiers’ industrial gospel punk, it will be fascinating to see how deep the well of creativity is for this one-of-a-kind concept.