The iconic singer excels in leading his audience where he wants to—and we love it! 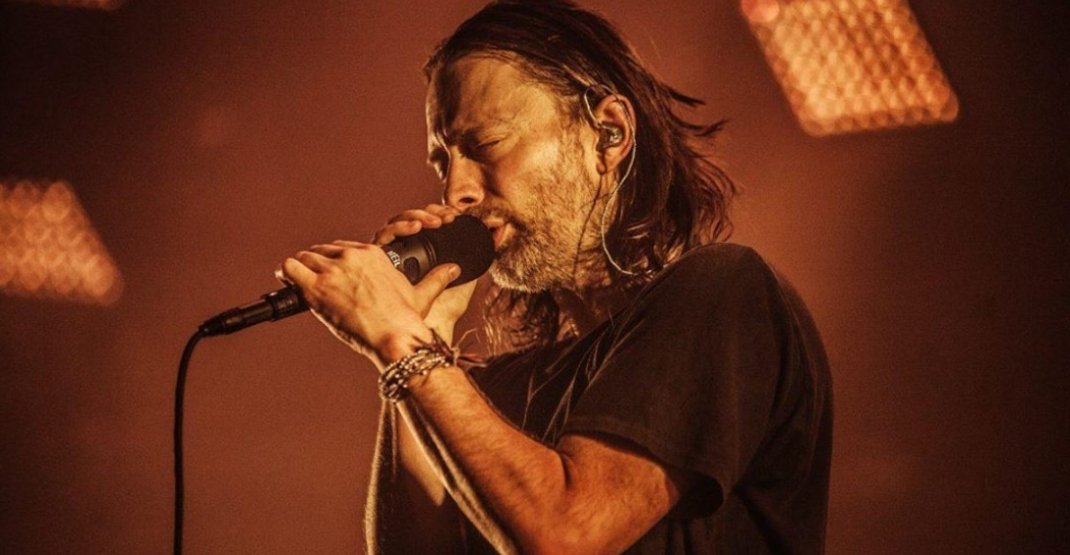 Thom Yorke’s concerts are not just a musical show with a collection of songs played one after the other - Yorke wants you to embark on a musical journey with him. This is exactly what happened on September 27 at the Scotiabank Arena.

“When an artist is repeating themselves because they think that’s what people want, they’re fucked”, Yorke bluntly stated in an interview with Zane Lowe, following the release of his third solo album, ANIMA. The record demonstrates Yorke still has multiple artistic tricks down his sleeve.

In his solo efforts, Radiohead’s lead singer displays his inclinations towards electronic music and electro-acoustic environments, as well as abstract visuals. Thom Yorke has frequently said that his latest concerts with Radiohead, which included significant musical improvisation, were a source of inspiration for writing ANIMA. On the album, he collaborated greatly with music producer Nigel Goldrich, who was present on stage at his September 27th concert. Goldrich controlled every aspect of the sound effects, and handled the transitions between tracks with precision.

The night started with a compelling support act from drummer Andrea Belfi. Belfi improvised on the drums over smooth, gliding melodies. There were no lyrics, just piano chords met with 15-minute long, passionate drum solos.

The importance of percussion was key to what Yorke expressed throughout his hour and a half long performance. The percussion was more pronounced than in the studio recordings of the songs, which helped the audience connect with the musician. Yorke’s unmistakable voice was also key to the music. However, I did not expect the concert to have such a techno music atmosphere. The show alternated carefully between slow, uplifting electronic tempos, and rapid, obsessive ones. Thom Yorke did not talk between tracks, except for brief thank you's, as he wanted his audience to focus on the musical environment he and his musicians tried so hard to set up. There was no time for him to speak, anyways.

However, there was plenty of room for him to dance! Thom Yorke’s iconic meme-material dance moves, made viral by Radiohead’s 'Lotus Flower' video, were also part of the experience. Thom’s use of the space was greater than during his Radiohead performances, and he seemed more relaxed and willing to move around the stage, in a slow and fun fashion.

The light design and visuals completed the experience, and often resembled the visuals of the trippy app that Yorke and Goldrich co-created, Polyfauna, in 2014. They were composed mostly of shapes which moved subtly when the tempo was slow, alongside flashing lights. The often psychedelic light design became more aggressive during some songs, like ‘The Clock’.

While the main part of the concert consisted of an engaging musical journey, the much-awaited emotional solo hits were reserved for the encores. During the first encore, Yorke offered a beautiful seven minute long piano performance of his moving track ‘Dawn Chorus’, featured in ANIMA. He was alone on stage with the piano, and slowly played the chords to give the audience a moving acoustic rendition. During the second encore, Yorke played again on the piano to perform ‘Suspirium’, the title track off the soundtrack he made for Luca Guadagnino’s horror movie, Suspiria. It was the last song Thom Yorke played that night. Again, it was a communicative moment with the audience, who had waited all night for the song to be played. The piano is not Yorke’s main instrument, and he had a bit of a hard time with the most complicated passages of the track, but the audience was happy enough to hear him play it. Yorke laughed off his stumbles, which made the moment more touching. It did not alter the track, as it retained all the emotional character that made its success.

A Thom Yorke concert is a truly great musical experience, with amazing rhythms and electronic sounds, enriched by Goldrich’s impressive track-mixing and Yorke’s uplifting voice. A lot of space was given to more emotional tracks, and playing them during the encores was a great idea in order to create memorable moments. Through his concert, Yorke shows his personal musical identity and his ability to establish himself as a successful solo artist. On October 7th, Thom Yorke celebrated his 51st birthday, and he continues to prove that he is still capable of reinventing himself.