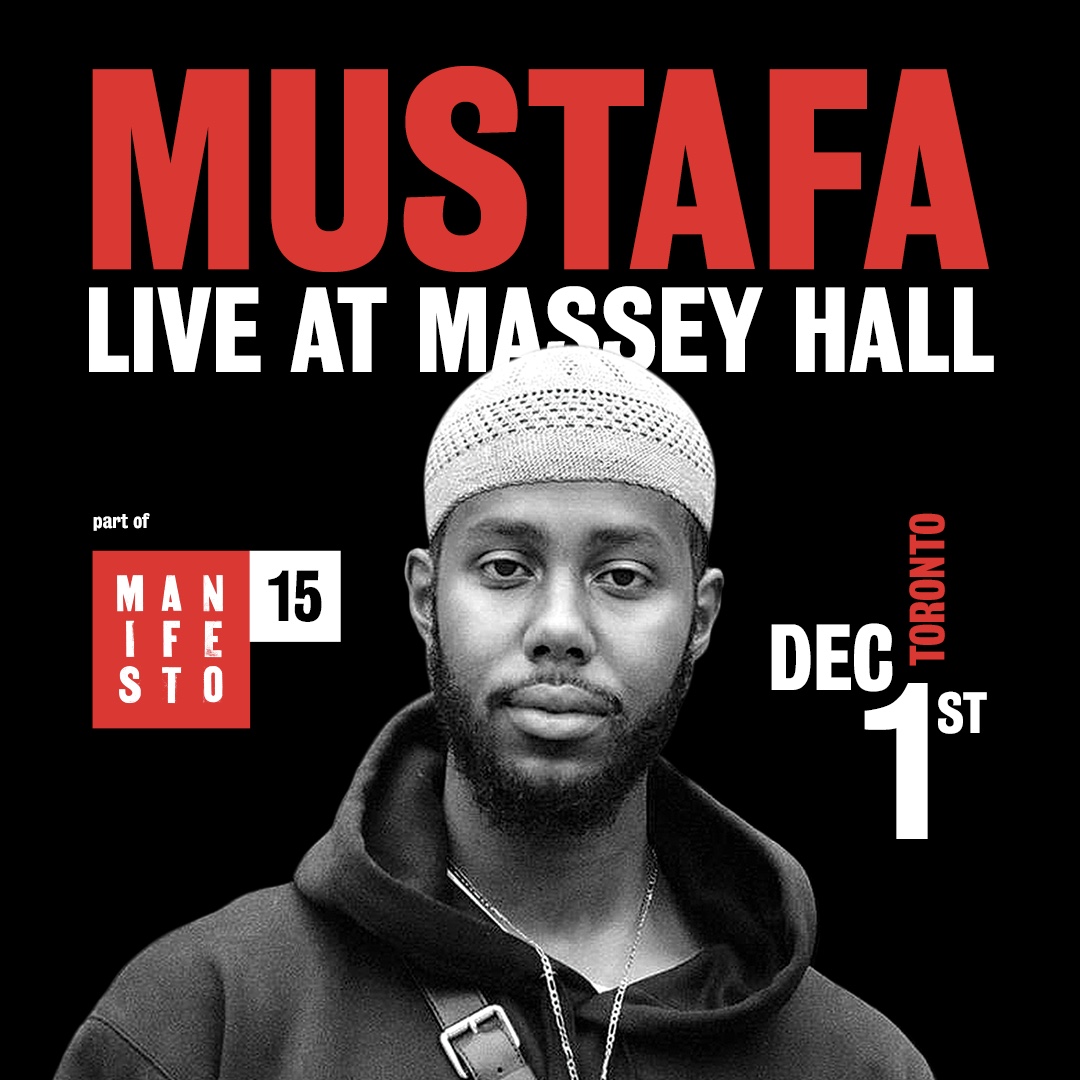 It’s a short walk from Massey Hall to Mustafa’s home neighbourhood, Regent Park. The Hall itself is across the street from St. Michael's Hospital emergency room and a shorter walk from the Bond Place Hotel, an emergency homeless shelter. It’s a weird part of the city, a sort of liminal space between overpriced condos, corporate highrises, and two of Toronto’s most impoverished and disenfranchised communities.

We were corralled through a series of metal detectors by an overeager security team before making our way up to the 3rd-floor balcony. The police were in abundance in the cold Shuter street wind tunnel, but the hall itself was warm and bustling with excitement. Little did I know, Toronto Police Services flagged the event as a risk to public safety, but as we made our way in from the frigid outdoors and starless city sky, Massey Hall was alive with excited conversation.

Mustafa is many things, a black man, a Muslim, an activist, but he’s also a home-grown Toronto artist. His debut album, When Smoke Rises, is a memoir, a love letter, a eulogy, to those he’s lost in Regent Park. When the lights fell, the projector buzzed alive, and a series of interviews played with rappers who’ve lost friends and loved ones to this city. As Mustafa walked on stage, accompanied by BadBadNotGood, a Malcolm X quote was displayed on the screen.

“I want to be remembered as someone who was sincere.

Even if I made mistakes, they were made in sincerity.

In a lot of ways, this perfectly encapsulated the show we were about to see. I wasn’t sure what to expect, but I got more than I could’ve asked for. As he introduced Stay Alive, he proclaimed that simply living was a revolutionary act in the community he’s from. And just as living was a revolutionary act, community was the revolution. That’s what this show was all about: life, community, and their mirror opposites, death, and isolation.

His voice soared with solemn determination through the subtly breathtaking melodies of his first song and every song thereafter. Atop the quiet mesmerism of plucking guitar strings, the tension built to glorious resolution. Mountaintop highs and bottomless lows reverberated from the crown of your skull right down to your gut where the feelings churned and tried to sort themselves out. It was all so intentional but so totally organic, and as the rasp in his voice intensified throughout tracks like Ali and What About Heaven, I couldn’t help but feel that little sharp pain in the back of my own throat.

I’ve never lost a friend the way Mustafa has. For that matter, I’ve never lost a son or a brother, a father or a partner, the way the families of Smoke Dawg and Ali, both in attendance, have. But, in open defiance of every stereotype or prejudice levelled against Mustafa, Regent Park, and every other marginalized low-income community in Toronto, he took his seat at center stage and walked us through grieving in communities locked in cyclical violence. With an astounding display of courageous fragility, he sang in such a way that you just understood. It was so acoustically minimalist you expected the whole thing to fall apart in a barrage of tears at any moment, and it did. Yet, supported by his cavernous baritone, it was as though the music was in his hands and he wasn’t going to drop you.

Mustafa, his ideas, his faith, his identity and his music are all too complicated for me to fully understand or to express succinctly. Listening to his album is a start, but seeing it live is a whole other thing. When he spoke, there was a duality in him. He had a youthful charisma about him, deeply funny and unapologetically honest. At the same time, he spoke with sage wisdom and presented wistful lyrics of stolen youth and robbed innocence. On stage, he sported a Sudanese jalabiya, a symbol of culture and Islam, the religion of peace, under a bullet-proof vest, which he admitted was backwards and didn’t carry any plates. For all that, when all the laughs were had and over, we were left with gut-wrenching naked displays of raw emotion.

I left Mustafa’s show awash with feelings that were difficult to qualify. It wasn’t really a show for me, and that’s okay. Early on, he addressed the crowd and thanked his home, Regent Park, for being there with him that night. As much as I loved every second of his performance, this was a show for the neighbourhoods that condo boards and tourism associations write out of existence, where the CN tower looms ominously and the apparatus of the state, negligent or aggressive, is weaponized. For me, Mustafa’s concert was a reminder that there are two cities in Toronto, and so much of what makes this chaotic mess of a place great is in the cultures and minds of communities like Regent Park.